Currently weathering the onslaught of the current crop of teenage 'popstrels' Kim Wilde is our only established female singer with a musical pedigree, yet somehow the mega fame showered on some less talented mortels has eluded her - we take a look at the enigma of Kim Wilde and try to find out why Kim is not yet our biggest star...
It's hard to believe, but do you know it's seven years since a sultry teenage first smashed into the charts with the unusual and memorable 'Kids In America'. This, the first in a line (if somewhat broken) of indiviudual sounding records like 'Cambodia'.
Kim has never been one to join in the glitzy glam side of the business and has gone to great extremes to keep her private life private, prefering the safety of her close family.
It has been s:lid that Kim's insistence in working with her father - 50's rock & roll star Marty Wilde and brother Rickr has held back a lot of her potential. A fact born out when she decided to do a cover of the Supremes classic 'Y ou Keep Me Hanging On' which hit No l across the world including America. But except for a mildly successfut coalition with 'Junior' has slipped into the background of mainstream pop.

However, Montreux usually brings about an appearance and a single release and this year Kim duly made an appearance on the back of her latest single release 'Hey Heartache' and a new album 'Close'. Image has also been a problem for Kim, her record company and the newspapers (and I suspect a lot of her fans) want her to be the raunchy sexy blonde that her looks indicate she should be. They tried it for a while squeezing Kim into tight rubber dresses and high stilleto heels and making a sleezy video for her single 'Say You Really Want Me' but it didn't work because as they found out looks aren't everything and for that sort of image to work it has to come from inside either from natural sex appeal or a want to be that way. It's pretty obvious that Kim is happiest wearing a casual mix of jeans shirts and bargain specials and her hair is like that of thousands of teenagers, cropped by themselves and bleached with a couple of quids worth of Boot's best when the dark roots become a bit too much. Yet, that careless tousled mane, that aloof quality, and the lack of obvious image manipulation puts her a million miles away from the "what image shall we use for this single" approach used by Madonna and a host of other Pop entities. Being herself is Kim's greatest asset but one has to wonder whether that is enough to push her to the top of the business, where image, slick record production and promotion is the only sure formula for success. Could it be that Kim has now realised this~ as her following comments may show;
"I was talking to someone the other day, about having blonde hair and why I chose to go blonde. And, obviously, being a rounded sort of person with big lips and everything, dying my hair blonde was a disaster as far as people taking me seriously was concerned, or even just recognising me as an intelligent being. Pcople in general have really preconceived ideas -not just about women with blonde hair, who have large lips and look pretty and are famous - but about race, religion, vegetarians, everything.
So I decided -not consciously -to put myself into a obvious bag just so that it was somewhere I could develop from. It's kind of a camouflage to sell - I know sex sells and I know blonde hair sells; so you know that you're on to a winner. In a way, it's quite calculated but I also think it suits me". But the image has never come across convincingly in her photos, she always looks better on video - why is that?
"To me there's a big difference between an ordinary camera and a movie camera. You can have an affair with a movie camera but not with every photographer who takes your picture - which is why I don't think I photograph very well. I had to do some photographs for David Baily a few months ago and lt was just dreadful. He's obvlously used to working with really professional models who jump in the air with their mouths open and he was going "Come on Kim, give it a bit of sass." So I was doing my very best, when he came up and said, how old are you? I told him 26 and he said, well, you know what I'm talking about then, and I just thought, you chauvinistlc plg.
And once I was doing a photosession and was instructed, by the photographer, that these were to be sexy photos for Japan and I knew that that was pretty much the way the record company saw it too. Now I've been called sexy all my career even though I haven't tried to be that, but as soon as someone asks me to do it I get offended and I just froze and had to stop the photo-session.
Making videos aren't a problem for me", she insists, "Otherwise I couldn't have writhed around on a bed with four guys, having fun and being totally natural. But I don't think I really cut it in photographs.
Not like Madonna, for instance, she looks fabulous and really feels good about the camera, but I feel at odds with it and at home with it at the same time: sometimes it's friendly and something I can have fun with but other times it isolates me and acts as a barrier between me and the world.
Sometimes I actually wonder if I've chosen the right thing to dO" she pauses. "But I'm much better in spontaneous situations, which is why I don't think I've ever come across as a strong media personality. My strength is definitely inside me".
Unlike many pop stars Kim remains honest and unaffected, except for having to guard her privacy and in spite of the contradictions about her image she is likely to remain a firm part of our pop scene for some time to come, as Kim says "Sometimes I can be eloquent but very often the thlngs that I feel are thick wlth emotions and are not the sort of thing that I can express. I love words but I'm not the most articulate of people. I suppose I'm always worried about people getting too close or knowing too much. So being mercurial - having blonde hair,but being at odds with people's preconceived ideas - is quite a good way of getting through life."

Kim says - "I wear Paco Rabanne eau de Calandre. It's very light and refreshing and suits all occasions so I don't have to change it when I go out at night" 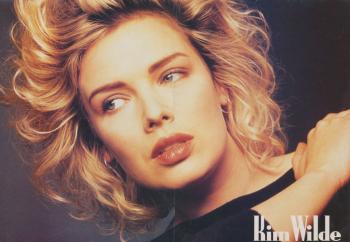 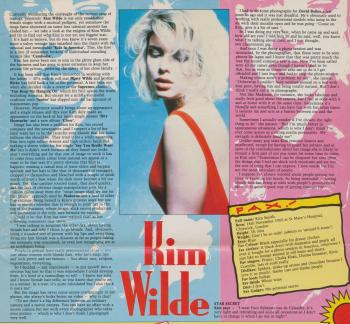