Kim Wilde is looking a little weary. She's only been in the country for two days and already she's done a few dozen interviews - and there's a whole week ahead of the same thing. No wonder she's looking a bit frazzled. Mind you, she's coping well with it all.
"I've gotten used to this promotional thing", she says with a sigh as she reclines on the couch in her hotel room. "I mean, when I finished the album ("Close"), I went straight into the tour with Michael Jackson and then I went to America for two weeks, then to Japan and now to here. I've really been living out of a suitcase for the last year or so and it's beginning to lose its... um... glamour a bit."
The reason that Kim's out "on the road" doing all this promotional business is the success of her latest single, "You Came" - and the story behind it isn't at all as rude as you might think. (Sorry??? - Ed.)
"Well it was one of the last songs we had written on the album", she recalls. "My brother Ricki wrote the music. He told me he'd been inspired to write the music because he's just had a son, so that in turn inspired me to write the lyrics. I mean he came into all our lives and children have this way of becoming the most important thing in your lives."

"You came" is only the latest in a very long line of hits that Kim has managed to clock up since she reached No. 1 way back in 1981 with "Kids in America". The hits came easy for a few years, then Kim hit a slump, changed record companies, began to write her own songs and recorded a version of The Supremes' "You Keep Me Hangin' On", which gave her another No. 1 at the beginning of 1987. But being famous, for Kim isn't always as wonderful as it would seem. Except for the odd occasion when she's in the company of a few other pop-types who have also decided to "let their hair down".
"I was in Germany to do this TV show", she laughs. "I had a great time after the show when some of us had a few drinks and Simon Climie (from Climie Fisher) got up and started singing and Rob Fisher (likewise) started to play piano and I joined them. Rick Astley was there too and he was being quite naughty. He kept putting ice-cubes down everyone's backs!!! It was a lovely evening though - unfortunately they don't happen often enough."
Being a bit of a foxtress, does the idea of appearing nude in a magazine and getting paid a million dollars for it appeal at all? Kim giggles, then gives a surprising reply.
"I might in ten years time when I'm 37 - then no one could accuse me of trying to exploit my body for success. By then my success would have passed."
And the million dollars?
"I'd give it to Greenpeace!", she announces with conviction, being a member of the organisation herself, after all.
Kim also reveals that all the fuss being made in the "news" papers about her battling it out with Madonna for the role in the movie Evita is quite a lot of old cobblers.
"It's not true", she cries. "It's not something I've got great ambition for - my music is more important at the moment."
Thankfully, Kim has no plans to leave the world of pop just yet - but she has got other things on her mind - like going to the pool on the top floor of her hotel for a swim.
"I love all this sunshine", she burbles as your reporter gets shuffled out and our Kim gets set to take a nice little dip in the giant pond above - and, by golly, she's earned it!
Kim Wilde - she came, she saw, she swam!!! 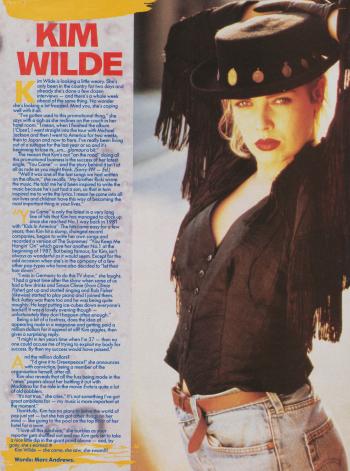