Since 'Kids in America', her first hit, the beautiful Kim made her way. After two years absence, she returns with a new song 'You Came' and a big surprise: Kim was chosen from six groups handpicked to ensure the first part of the show Michael Jackson. 'Michael', she said, 'is a historical monument...'

A career plan developed by her older brother Ricky and her dad, former rock 'n' roller Marty Wilde.
'People often complain to me', Kim is surprised, 'I am told that this must be stifling to work with family! We evolve together. My father and my brother will only allow me to be more demanding.'
From the beginning, Kim worked as a family with her father and brother. Marty Wilde's father was one of the first stars of rock 'n' roll in Britain. He has guided her through the world of pop music and has always encouraged her.

'I grew up listening to the Beach Boys, Simon and Garfunkel, Joni Mitchell, Kraftwerk. My father had good taste. As for me I never felt the need to rebel against my parents: we liked the same music.'
Together, the Wildes launched 'Kids in America', 'Water on glass' and 'Cambodia', but it was not until 86 that Kim has managed to carve out a truly international reputation reaching no. 1 in America with a cover of the Supremes hit 'You keep me hangin' on'.
For Kim, the family represents a very important support and strength for professionals.
'It has nothing to do with the mafia', she said, 'it is not incest, and even less unhealthy. Each family member lives independently and nobody is exploiting anyone.'
Kim has always been aware that showbiz was a ruthless world and needed to be surrounded in order not to feel lost. 'I am lucky to have parents at once tender and competent. This is an opportunity and not an abuse of power.' Her father worked on her albums since the beginning but now he leaves them to fend for themselves, her brother and herself.
Kim's brother is married and has a little boy which is not always very easy for travel. Much has been said that Kim never parted from his family but this is false. 'They are very casual. It is a joy to work with them, but I also work without them.'
In the opinion of Kim, working with his brother is not always very easy... 'He has great ideas and I love him, but he does not spare me, that sometimes makes the working relationship very tense....'. On her latest album, Kim has worked extensively on the composition of songs. She wants to write more songs herself, and come to become his own producer.

Kim and Michael: the encounter shock...

The 'Mystere Jackson' did not seem to pose any particular problem with the serene Kim. 'Most of my close friends are famous people, I do not get traumatized...'. So do not worry for Kim, who nevertheless regards it as a supreme honor that she is playing in his show. 'If one day I was told I would be part of a show for Michael Jackson I would have laughed ...'
That said, it does not consider as strange as it does to be on the same bill as the star.
As to the meeting it went very easily and very quickly. Jackson's manager contracted the mother of Kim and asked if her daughter would feel able to undertake such a test. Kim was not the only one on the list. The Jackson team had watched tapes, reviewed files. 'Out of everyone', says she, 'I was the one that impressed them the most live. Me on my side I did not hesitate a second. To promote my album, it could not be better!'

What she thinks about all the rumors about Michael?
I do not want to criticize him. The genius is forgiven some excesses and I do not belong to a family of those who take pleasure in demolishing the stars. On the other hand, I'm vaccinated against the strangeness and craziness... '

The look of Kim:
I have the chance to change your look easily. I like change. I also love clothes. Not only those of top designers.

The artists she likes:
Etienne Daho with whom she would record a duet, Alain Chamfort, Laurent Voulzy and Alain Souchon.

What she does when she is not devoured by his profession:
She lives in a huge apartment in London but she does not have much time to stay there. When she is at home she washes clothes, cleans, calls her friends, pays the bills and throws away what is left in the fridge for six months! She dines out because she still admits to being a very bad cook... She visits art galleries and painted to relax.

Finally her lovers:
The British press are always eager for scandals... Few adventures for Kim, who is not fickle ...
'I rarely fall in love. I had a serious relationship in the past six months and then it ended. I would like to have children, establish a home but not before I'm thirty and I think I would stop touring if I had them. 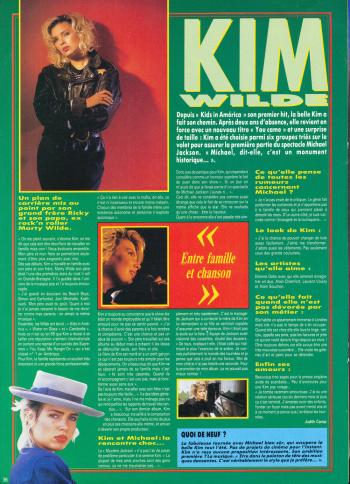 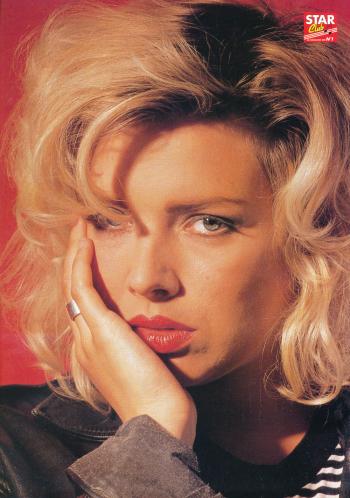