It doesn't often happen that to keep up with the developments in the pop world you need to travel to the countryside of England. And yet we found ourselves in a cute village named Knebworth, which is very very quiet. We head to the studio where Kim Wilde is, resting from the tour with Michael Jackson. With her legs in a basin of warm water, she admits she is exhausted from the tour. She intends to move to this beautiful village because she has just bought a 400 year old barn in the middle of a farm. She also declares, for no apparent reason, that she is "very interested" in interior design, wants to "dabble" in "wall murals" and thinks the new tune she's invented, "You Came", is "the most mature thing I've ever done". But this is not all she has to say about her long "career" as a popstrel. Listen up!

SHE DOESN'T WANT TO HEAR A BAD WORD SAID ABOUT MICHAEL JACKSON!
"I just get really upset when I read all this crap in the newspapers about me being snubbed by Michael Jackson. I have met him and he's really sweet. We haven't sat and had an in-depth conversation or anything, but I hope that I'll get to see a bit more of him during the rest of the tour. I really won't hear a bad word said about him. The adverse press I read about him I find personally very repulsive. All I can say is that the person I met was very sane, very normal, very sweet and very lovely. He had a gorgeous smile and you can tell a lot about a person by the way they smile."

SHE CAN'T WORK OUT HOW HE DOES HIS AMAZING TENT TRICK THING!
"Watching Michael's show from the wings is fantastic! It's just a completely different experience. Watching from the front you get the full blast of all the effects and dances and stuff and it looks really effortless. But from the side you can see the work that goes into it. It's beyond me how he does the effects. I mean, I was really trying to look because he gets into a sort ofa tent and then next second he's at the other side of the stage. I mean, I was sitting right on the side of the stage and I still don't know how it was done!"

SHE DENIES RUMOURS OF TRUE LOVE WITH CALVIN FROM JOHNNY HATES JAZZ!
"Me and Calvin Hayes??? Hihihihihihihihihi! Well Calvin and I, I don't know if you know, have been friends since the beginning of my career. He used to drum for me in my first band. We go out sometimes and just recently the papers have cottoned onto it, but we've been doing this for years. But then I've been romantically linked with loads of other pop stars in the past. Going right back, there was a story that me and Steve Strange (ancient spook-bloke who was a "New Romantic" and wore piles of make-up) were going to get married, and then a load of stuff about me and Adam Ant (another ancient bloke who used to pretend to be a pirate and made girlies blub). Apparently Rick Astley was supposed to be madly in love with me... I read about this stuff and, I mean, I know these people. It's really embarrassing."

SHE THINKS SHE WAS PROBABLY JOAN OF ARC IN A "PREVIOUS LIFE"
"Sometimes I really believe that people have had previous lives, because you can meet an eight year old child and they're wiser than an 80 year old man and you can't help thinking that the wisdom comes from somewhere. I've always had a feeling that I've had quite painful previous lives, which is why everything's so comfortable and lovely now. I think I went through considerable pain and I also reckon I was something quite heroic, maybe Joan Of Arc, that quite appeals to me. (Joan of Arc was a French woman who ended up getting burnt at the stake which isn't very nice when you think about it.) I don't think I was ever a man though, for some reason."

SHE DREAMS ABOUT TOOTH DECAY!
"I have one recurrent dream where all my teeth fall out! Suddenly my mouth is full of teeth and hove to spit them out and my whole mouth is kind of like decaying and... it's quite gross really. I read a really good book about dreams, because I think if you understand your dreams then you can solve your problems. From what I can make out from the book I have the dream when I don't feel in control of my life, when it all runs away from me... Funnily enough though, I'm not scared of going to the dentist. I have about six or seven fillings."

SHE USED TO MAKE HER NEIGHBOURS' LIFE A MISERY!
"I'm not that much of a prankster, but I did make a crank phone call once to a bloke I was going out with which was a bit of a disaster. I pretended to be this other girl but he seemed a bit too pleased to hear her voice! I didn't go out with him for long. Most of the pranks that I pulled weren't on the phone, though. My best friend and I cut out a subscription coupon from Playboy (perv "men"'s magazine) once and got a year's supply sent to my next door neighbour! We doctored their milk bill once and altered it to quite a lot of money, but just enough so that it was still within the realms of possibility. They had complete hysterics!"

SHE USED TO PRUNE CARNATIONS FOR A LIVING!
"I had two really awful jobs before I became a pop star. One was cleaning a hospital, which included doing the loos and whatever else may be lurking there. The other was dis-budding carnations, which was monumentally boring. What happens is that they grow to about six feet and they're held up by a network of strings. The purpose of dis-budding is to nip off every flower except the one at the top so that it gets all the goodness. I did it every Saturday for a long long time. I don't much care for carnations any more actually."

SHE EATS CHEESE AND JAM SANDWICHES!
"1 absolutely love baked beans, they're my favourite thing in the whole world. They're very good for you too, plenty of fibre and no preservatives. And I like Japanese sushi (raw Fish -berleel} and cappaccio which is very thinly sliced beef, and gaspaccio which is very spicy cold soup. I do like cheese and jam sandwiches, especially first thing in the morning! I always have them if I'm in Europe, because all the continental breakfasts have like loads of cheese and jam in them and because I don't normally have much time I tend to eat them both together! It's very nice. It's like deep fried camembert with raspberry sauce. Yum!" (Triple sper-yoo)... 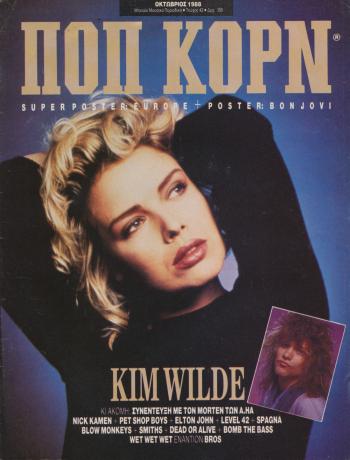 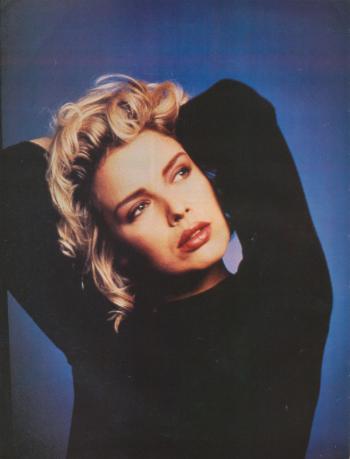 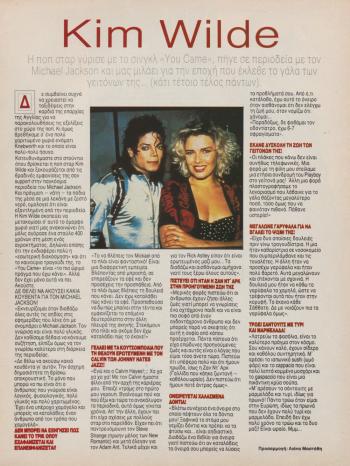