Becoming a singer was something very natural for the beautiful Kim Wilde. Her mother was a vocalist, her papa rocker, songwriter, and it was thus easy for her to enter into this a priori very closed environment that is show business.

Only, then, does not obtain the success which wants, it is necessary for that to have talent. The whole family was behind Kim in 1981 when they released their first single, 'Kids in America'. Mom instilled harmony in her, papa wrote and produced for her, with her brother Ricky, this first song and first hit.

Kim quickly became a song superstar in Europe with titles such as 'Cambodia', 'View from a bridge', 'Love blonde'. But it was in 1986 that her career made a decisive leap: the fame of our pretty Englishwoman finally reached the Americans. The rhythm'n'blues of the 60s and the artists of Tamla Motown are very fashionable, and among the return to the air of the great classics of the time, his cover of "You keep me hnagin 'on", song created by the group of Diana Ross, the Supremes, in 1966, made a real impression.

After this great international success, Kim Wilde is preparing an album even more personal than the previous ones. Totally accustomed to studio technology, Kim actively participated in the production of this new disc which she wrote with her brother who is the producer. The little ones work alone today and Dad Marty can be proud of it. 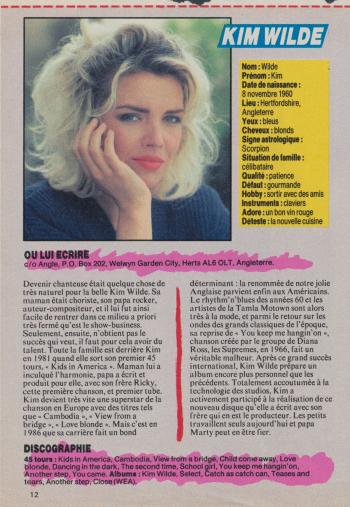