Kim Wilde, everyone knows, has sung in the first part of Michael Jackson in many countries. Visiting Paris with her new single "You Came" and her album, she had lunch with us for an update on her ambitions as an artist and as a woman. Serene but voluntary, built stone after stone edifice of a great career without stifling Kim, the woman who hides behind the singer named Wilde.

You recently provided the first part of Michael Jackson on tour. What kind of experience was it?
It was a good workout. In fact, I had a challenge. I had won the public was to see Michael Jackson and not for me. It was a gamble to be on this scene and then come to be appreciated and accepted.

You felt the audiences were difficult?
Not at all, I even found very friendly with me. It seemed like my performance. I still remember the day a fantastic experience because the audience and I were very close. It was good!

It was a chance to sing in front of many people?
Of course, because there were two million viewers. The biggest concert that I made was given in my country, Australia, in front of 125,000 people. It was great! The tour was worldwide and we did 25 shows with Michael.

Are you nervous before a concert?
Not really, I am sometimes nervous before a television program. I feel anxious when I do not control what I do. However, I must admit that the beginning of the tour was quite difficult. But after the first 3 concerts you know what you expect, you have more control. The show that I liked the most was the last.

It was a lesson in professionalism for you?
Yes of course, I'm already mas sufficiently professional myself. In this kind of big machine together everyone has to be professional, at each position. It is important that everything is perfect.

Before going on stage, you practice relaxation techniques?
No, my way to be relaxed before a concert is try to relax mentally talking to people, laughing. I try not to think too much. I do not plan things, ask me feeling sour the public ... As is often my brother and sister with me, we talk, we play ...1

Did you really talk with Michael Jackson during the "Bad World Tour"?
I have met only once during the tour. But, it is already not bad! He is very nice but very reserved. I find it hard to understand because I do not know him. In any case, I thank him for giving me this great opportunity. As for his team it is very nice. I had a very good time with his musicians and his manager. The people around him are very relaxed. This is a great souvenir!

All the spectators were probably given you the desire to tour alone?
Yes, we are working on this project for next spring. I do not want to do a show with special effects for decoration lightings and huge. The most important thing is the music and communication with the public. To do something too theatrical I do not desire. With Michael it fits better than anyone.

This tour made you take a step in your career?
Yes, because now I sell more records and tells me increasingly heavy responsabilities. It's amazing, I draw the world's media!
In fact, I do this profession for several years but now I really the life of a famous person. So I must take care to keep my credibility with the public.

Your album seems to be autobiographical. Some words are not always easy to sing?
When I make music I do not rechrche ease. Making music is like living a love story. There are good and bad sides. So some songs are harder than others. Things essential truths go straight to the heart of the public, they do not make detours but they bring the greatest moments of the concert. I'm not afraid to go far in difficulty. I feel mature enough, strong enough. At the beginning of my career people saw me as a happy, indestructible, but also cold. I want them to see me more human present. Do not they believe that the trade of singer is not dangerous. This is not a trade perfect.
If you want to do well, we must give up the self same. So, I do not want to show my imperfections, unveil my gifts, to confess my weaknesses. I am struggling to change my face because I'm in the middle of a transition period.

You do not like the star system?
I think there's a lot of noise around stars. This is what changes it all! Sometimes I noticed that people around me act in my opinion. I do not want that. I want to share forward.

For this profession and your family is a musician, you do not have feelings matured earlier than others?
Yes, already having known a father allowed me to start very young. It was good but I had to be careful a lot of things that I choose is good friends. I saw other children grow slower. I had a different life, but in my head I had dreams of a little girl. Finally, I think this is my first boy friend, my first disappointment in love that made me a corner.

Is your life as a woman suffering from your celebrity?
I think me and my life, it does one and same thing. I have fairly short relationships with men, but I do not think this is the celebrity who causes it. Famous or not it would have been the same. What bothers me in current relationships is the lack of imagination. Sometimes I regret not being able to afford certain things. Being famous is forcing you to think twice before acting, because people can react to Kim Wilde and not a woman like any other.
What a pity! There are times I do not dare to approach people, and I have a hard time telling them what I feel.
But I'm happy to do this profession that I love above all. I do not want to compromise, specially in my love stories.

Is there a competition between the singers?
I'm not jealous of anyone. I always recognize the talent of others. However I noticed that in France, when you become famous you look at it differently. It is strange to you. It has some good sides because when I arrived in France I am aware of my fame. England or the United States between the Units artists are less stars. There is no feeling of competition. That said, I am treated like a little queen Paris especially not young French artists. I find it rather enjoyable. 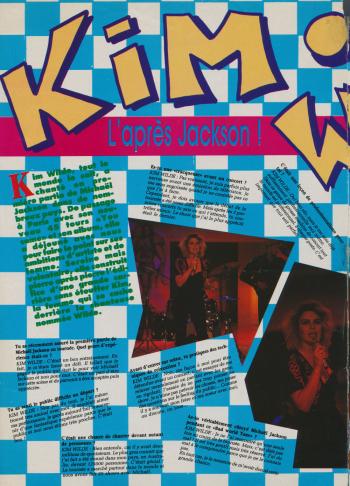 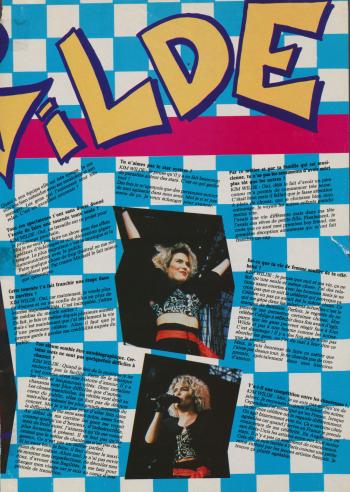