Kim Wilde comes in from the cold

After 12 months in cold storage, Kim Wilde is once again a hot item in the pop charts. She's back with a provocative new image and an album just about strong enough to keep her ticking over at the top for some time yet.

The full weight of the Wilde family is thrown behind Kim's latest release, Close, with brother Ricky co-writing eight of the 10 songs on offer and father Marty - the '50s rock 'n roll heart-throb - helping to pen five of them.

Even Kim, the shrill-sounding singer with a newly discovered passion for figure-suffocating outfits, chips in with eight song-writing credits.

Close treads a familiar path, with the bulk of the material providing an echo of past hits such as View From A Bridge, Keep Me Hangin' On and Kids In America.

The album has already spawned two monster hits in the United Kingdom with Hey Mister Heartache, an impressive duo with south-London soul-boy Junior Giscombe, and the gratingly catchy You Came both roaring into the British Top 10.

However, the album's choicest offering is without doubt the irresistible European Soul, which floats along to a breezy backing track brought alive by piano and Spanish guitar flourishes and memorable melodies.

The song has all the ingredients of a massive hit and it would be no surprise if the record company had already pencilled it in as the next single release.

Four Letter Word is another of the highlights, with Wilde's voice managing to achieve minor vocal acrobatics to cope with the meandering harmonies of a subtly penned ditty.

The album, for all its bouncy appeal, has its disappointments though, with songs like Love's A No and You'll Be The One Who'll Lose, clogged with contrived emotion and devoid of the merest melodic appeal.

The is also an inexplicable cover of Todd Rundgren's Lucky Guy - the song was forgettable enough when he released it and Wilde's insistence on churning out her own insipid version is rather perplexing. 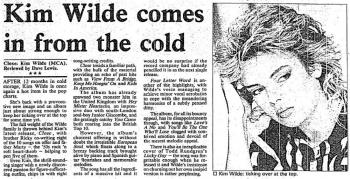