Kim Wilde is one of the hottest stars in music: super voice, super figure, super gigs. Here she says what she likes, what she dreams of and why she always returns to England.

When I start to write a song, I sit at the piano and play around until I find a melody. Or I play the guitar. The whole new machine technology doesn't appeal to me a lot. I use it only for my recordings. But I mean that anyone can identify that my work is based on real instruments. It always brings forth good "old-fashioned" music, and I like that!

Kim Wilde, 27, looking better than ever (she's working in the music business for seven years already!), gets very enthusiastic when it's about her work. Since "Kids in America", her first chart success, she has had several ups and downs that come with the music business. For a while it didn't go so well with Kim, things quieted down. "But I knew that there would be better times again, as soon as I found the right entrance again!"

In England it worked this winter with "Rockin' around the Christmas Tree", and with us right now with "Hey Mr. Heartache", a real super hit. "And that I'm touring with Michael Jackson is of course also sensational."

Kim is the daughter of one of Britain's fifties rock stars, Marty Wilde ("Endless Sleep"): "I grew up hearing the best groups. As I child I repeatedly heard "Pet Sounds" by the Beach Boys, Simon & Garfunkel, Joni Mitchell and Kraftwerk. Probably I've never had to rebel against my parents. We got along too well."

Less fortunate was Kim's lovelife. With John Lennon's son Julian, who is younger than she is, it went well, but now she says: "We were just friends, we have never had a relationship." Also Anthony Delon should have made an impression on Kim, but she says: "I like blonde guys better than dark-haired ones."
Terence Trent d'Arby wrote her: "You've got the most beautiful pout I have ever seen."

Momentarily Kim (measurements: 90-58-88) is single. "I am promoting my new album, then the tour with Michael" - of whom she says that he is the best pop star of all times - "and then I'm doing some gigs of my own in the autumn."
What music she hears when she is underway?
"The Christians, Prefab Sprout and Climie/Fisher. But my favourite artist of all times is Todd Rundgren. I am very happy to have covered his 'Lucky guy' on my album."

The new album "Close", the sixth album by Kim, is doubtlessly her most ambitious work to date: "I have locked myself up in the studio with my family and Tony Swain, who produced the album, to record "Close"." She's kept away from new fads in the music world: "I believe I have found my own identity."

Kim lives in London in an apartment and is renovating a new house - a farm that used to belong to King Henry VIII's doctor. "I like to travel", she says, "and in fact I like the South of France the best. The people are okay, the food is superb and most of the time the sun shines. Totally different from England. But I will always return to England, because my friends and my family are there - and my roots." 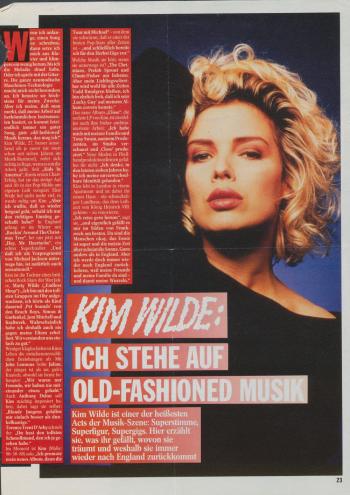