Date
1 October 1988
Published in
[unknown] (France)
Written by
Anne-Caroline Remond
By nature, Kim Wilde is not an optimist. Loneliness scares her. Her refuge: the song and her family.

Wild, Kim Wilde? No. The baby doll of British rock is all wise, all dressed in black, very simple. But unbearably sexy. The piercing gaze, the blood-red lips, the ruffled hair, this blond angel who just finished her European tour with Michael Jackson, has only one desire: to rest and write her songs. Before that, she will have to go to Japan, Australia and then to the United States to promote her last album 'Close' whose hit 'You came' is a hit at home (in Great Britain) and in the top stack of the charts in France.
After crossing the desert, she seems to be coming back. Her recipe: to be constantly close to the people she loves. "My parents, my brother Rickie, my musicians and my best friends, but it's not a mafia, I'm surrounded by optimistic people who do not see life in black like me," she says confidingly. Because 27-year-old Kim Wilde faces success and setbacks. Despite this, she continues, she clings. Kim admits, however, that he is not really ambitious: "I'm not like Michael Jackson who dedicated his life to music, he's mysterious, alone and shy, but I'm none of that, and I do not want to isolate myself".
Would she like to become an actress like Madonna? "An experience to try but it has to work in my head, look at Michael Jackson, it took him some time before acting". One thing is certain, she has a lot of admiration for Bette Davis and ... Isabelle Adjani. After a pause, she adds, "I may not be crazy enough to be an actress ..."
More patient, more attentive than ever, Kim Wilde knows what she is worth and what she needs. To be in shape before a concert, never a drop of alcohol, but rather... a cup of tea between friends. Did you say British? 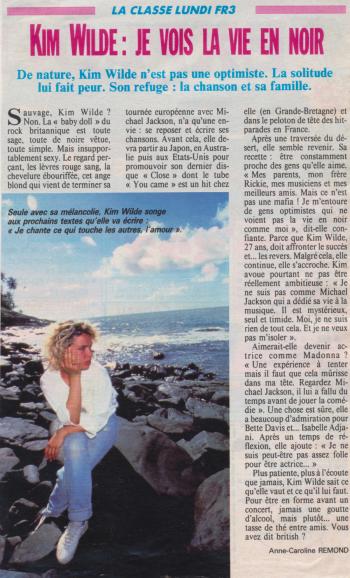