Kim Wilde: 'I want to protect myself, I think it's dangerous to unveil too much of my private life'

The year 88 has been the year of all success for Kim Wilde. The pretty blonde doll of Anglo-Saxon song was in the charts with different successes derived from hwe latest album and made a tour of concerts in the first part of Michael Jackson. This girl, whom some see as a sort of sex symbol, has arrived at maturity, participated in writing of his songs and knows exactly what she wants and what she does not want. What she wants: songs, music, stage and still be close to his family. What she does not: display her private life. Kim Wilde in all her sweetness and determination, just Flair for you ...

She arrives in Paris, she left for London. Kim Wilde does not stop running, success has its demands. For only a few hours in Belgium, she confides in Flair.

You are at the pinnacle of your career. It is a very important time for you?
Yes, absolutely. Already when we decided to make this album, it was an important step. We directly realized the importance of this album. This is already my sixth 33rpm and I know now what I want. The past year has been decisive. I also had the chance to do this tour with Michael Jackson, the opportunity to show my songs to thousands of people. At first I was frightened but I love challenges, especially in my work.

You've met Michael Jackson?
Only once. He's a very enigmatic, very secret. We never saw him.

What other art forms interest you?
I love painting. I paint but just for me, as a hobby. I wish I could do more. This relaxes me, it's a bit of a way of forgetting everything, to escape to my concerns.

We know practically nothing about your private life. It is a choice?
Absolutely. I think it's very dangerous to unveil too much of one's private life. I'm just a human being like everyone else and I want to protect myself.

You are not interested in acting?
No. I have fun when it comes to shoot a video but it is a challenge again, for a few days. But I'm not an actress! I am open to proposals for the future but it is not part of my ambitions.

What are the things that have changed most since you started?
I never think about my beginnings. I think one of the crucial points is that I started to write. It was very important for me to participate in writing the texts of my songs. I became more credible. Gradually I became more sure of myself, more confident.

What are the things you do not want to sacrifice for your career?
The relationships with my family. Everybody says it's obvious because we work together but this is not especially true. Emotional relationships are more important than the relations that we have. It is a relationship that requires maintenance, work. It's like a couple or it is finding the way to live together and it's not always easy. I will never spend my career before my family. Supportand me a lot and they understand me and I'm happy.

How important is your image?
I am as I desire, I wear what I want. It is not dictated by fashion. But sometimes I enjoy being smart and well dressed because clothing is a characteristic of our personality. But fashion is not one of my primary concerns.

Why would you be able to spend the most money?
Perhaps for antique tapestries, antiques in general. Art objects (in French in the text!), Good wine, and charities.

Many people see in you the image of women, a sort of sex symbol.
I play the game while we try to respect me for what I do. I try to be spontaneous. Some follow me for years, I see change, but they do not really see me as I am. People need to be close to the stars. For several years, I learned a lot about myself, I wonder and I am questioning. It's hard to say what people appreciate me. I hope that somehow, they recognize my talent as an artist. That's the only thing that concerns me. I never wanted to be part of the star system, I just want to be myself.

And to your family?
I think I'm funny and faithful. I am honest with them. I am available, I listen and it has nothing to do with work.

How was your meeting with Laurent Voulzy for her song 'Mes nuits sans Kim Wilde'?
Four years ago, his record company told me about him, saying he had much success and wanted to write a song about me. I thought it was ridiculous! I could be flattered but it was exaggerated, 'too much'! He could write a song about anyone but me out! They sent me the song and my brother listened and told me much good. As I liked the melody, I let myself be convinced. We did this as a joke, I do not want the public to take this song seriously. Laurent and I have become friends since. 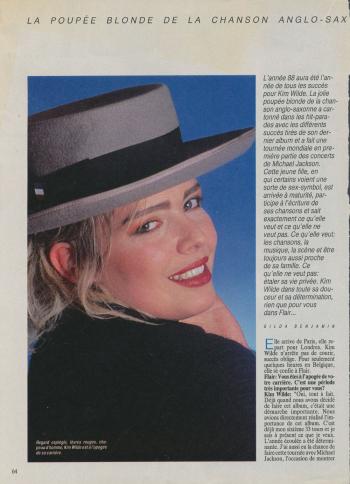 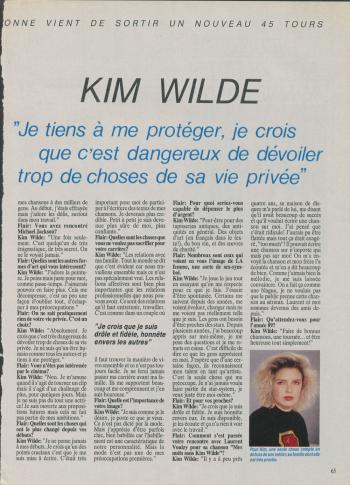