"Close", your last album is it very different from "Another step". Why?
Yes, of course it is different. "Another step" I took a lot of time. Almost a year to write the lyrics and to record. "Close" is lighter and it is a lot faster, in three months! But my voice has changed, it is stronger. My first albums were inspired rock with a punk. Today I'm more influenced by musicians who are dancing. "Close" is affected. It is more soul.

Why the title "Close"?
Originally, I wanted to name it "Closer". In fact, it is a combination of two things: "close", closer to the music I want to do and closer to me because of the lyrics.

You worked for this album once again as a family?
Yes with my brother, Ricky and dad (Marty Wilde). But my father didn't invest so much this time. Ricky and him only did two songs on the album. But I need him ais finally it may be too much, I mean I've always wanted to have his advice. He has a great ear. As for Ricky, he produced "Close" and has even participated in the backing vocals for "Hey Mister Heartache"!

What do you think of the song "You Came"?
I love it! I can not imagine it sung by someone else. It is mine. And this is why I love working with my brother. We have unique relationships while we live as a group, with any disagreements that may exist from time to time and make separate groups. Not us. And I like the sound of this song.

Is it imporant to you that people dance on your music?
Yes. For some songs, it's more fun to dance than to listen. The dance is another form of emotion.

You just finished Michael Jackson Tour. How did it go?
Awesome! For personal and professional reasons. Meet the best team of musicians, technicians, it is not nothing. And they welcomed me kindly, with great respect. I made friends. It was great. The cose is a little sad that Michael is the only star today and he pays the price. He has little contact. In fact, it is quite isolated. But when you have a year or more on tour, it's hard to keep its roots.

Did you say 'yes' to doing this tour immediately?
When my manager told me that I was the guest star of the tour, I said "NO. I don't have the experience" etc ... In fact I thought it would be exhausting. Well no, not at all, it was a very pleasant experience. Public and very nice. It is curious, it is very relaxed with me, he knows me or not. Very hot, he encouraged me. From May to July, we sang in front of two million people.
I feel drained. like a zombie. For days I was obsessed with the next concert, my throat, my clothes, my voice etc.. Today there is more pressure. I'm a little confused. I'll take two weeks of vacation.

You dreamed of being a singer as a child?
Yes, or a dancer. But I think I'm better singer than dancer. Somehow, now I can do both.

Your father was a star when you were born.
Yes, a big star. He was a rock singer. And when the pop happened, of course, it was more difficult. But he started writing songs for other artists, with success. He has a house in the countryside. He sings from time to time. He is happy with his experience. He knows all the problems of being a star.

Are you now the same public?
I never had teenagermania. I think the family in general like what I'm doing is particularly true for "Cambodia". This is also true for Michael Jackson, which drains a large audience.

What was the music you listened to at ten, twelve years?
I was listening the best rock 'n' roll, Elvis Presley. My father went to see him in concert. I liked Gary Glitter (one of the big stars in 1972 with a 45s Rock 'n' Roll part 1 and 2). I was a fan of pop music. I was listening to Joni Mitchell, Aretha Franklin. But the family we had music in common, it was a way to communicate. I was talking with my father especially. My mother loves music but she occupies at the organization level.

Were you ready in 1981 when your brother told you to come sing?
I had to leave the college and this is what I wanted to do. Not in a band with a guitar but making music immediately.

And you wrote in 1981?
I've always written poems, things like that. One day I heard a song on the radio and I thought I could do better. My first two songs on the album "Teases and Dares." It is like a person you admire, that is funny. We say it is geniale and never be able to be as funny. I thought I was not capable of this kind of creation.

Being an artist is traveling. Is it difficult to maintain friendships in the conditions there?
No, not at all. I have an apartment in London. I have friends there long, long before I am known. My girlfriends came on the Tour.

How do you see your life in the future?
It will always be music. But there are many other things I love: painting, producing other artists etc ...

The ideal man?
That is terrible! Someone nice and busy, it has a center of interest in life. Of sensitivity. And funny! 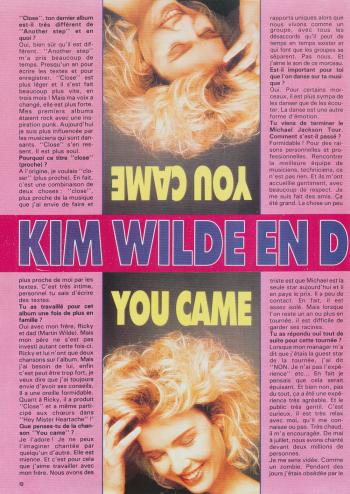 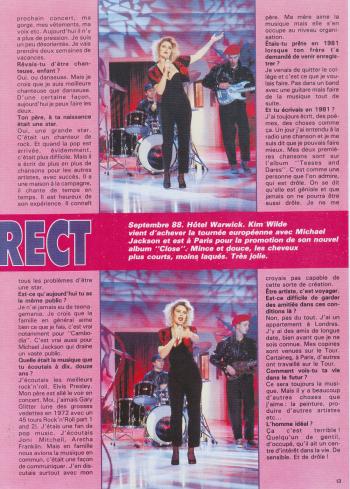