She is our little beloved English mermaid. Mother courage on her side, she defied Michael Jackson. And it has made her big. At Olson, between bites of salmon... she told us the romance of her life version of 88... She is happy and does not hesitate to proclaim the from rooftops for the media to listen. See you later Miss Kim.

If we make up the balance of this magic trick with the illustrious Michael Jackson?
It was a really great experience... Initially I had accepted as a challenge and then, upon arrival I realized that it gave me more than I could have imagined. In addition to the public behaved very friendly to me.

You've had to be overcome by stage fright?
I'm more afraid when I went into tv yesterday on the broadcast of Sabatier, I was very nervous because I could not be master of what I had to do. Sincerely, I have been worse than the first three nights on the tour... I found a great method to relax before going on stage: I relax mentally. I mean, I laugh, I tell stories to overcome my anxiety and I can assure you that it is very effective.

And is Michael Jackson as weird as they say?
I have met him only once but I think it's a scoop that he could talk to him, he is so reserved that I can say is that he is very nice and both, indefinable. In fact, I do not know more than before the tour. He remains a mystery to me... He has talent, and every night he proved it, and he is also sensitive. But I do not know how he feels. He did not become a friend, which doesn't prevent me to like him a lot.

Do not you feel to miss the friendship of a star!
You know, the organization of a tour represents a breakneck pace, it was like "two planes", so this is hardly conductive of creating friendships, so I ended up meeting him once after two weeks. And he did not disappoint. In addition, I had a good feeling with him... Is not that the point?

And from the tour, Kim returned to the small Tops of France and Navarre! It is a beautiful novel, it's a great story, isn't it?
Yes, indeed, I sell more records and I am increasingly being asked by the media worldwide. I lead now the life of a person who is actually famous.

In your opinion, your stage performance has surprised you can not sensed perhaps not so professional.
Let's say I have not tried to do "as Michael Jackson", I kept my originality, my simplicity it has deployed heavy artillery, I've made sure to introduce myself alone without scenery or costumes and with my own musicians.

Your album appear more and more autobiographical nature than in the past, have you matured in your head and in your life?
When you're an artist, you can neither play nor cheat, you have to be as close as possible to what you are, what you feel ... I am old, I lived, I learned, and now I understand that you have to fight and confront difficulties in achieving its goals. Before, I had an image of someone indestructible, invulnerable because I made sure to be seen as that. Now, I intend to show as I am, fragile and not perfect at all ... the limit, I am pleased when people see my weaknesses and they understand.

Are you in harmony with all the constraints inherent in the star system?
I think there are too many parasites that revolve around stars ... I try to be surrounded by people in whom I have unlimited confidence.

It also concerns your musicians?
They are my friends because it would be impossible to work with people I do not know.

You seem to have understood everything about your job?
I benefited from the experience of my father, it made me save time and avoid errors.

As you seem to have aged faster than others?
No, I feel I have had the same life as other children... I have not started my career early and I do not regret it because when I see the results of people who become stars at 13 or 14 years old. It makes me think. In fact what made me age, it is my first heartbreak.

Are private life and public life as incompatible as they say?
I've never had much luck in love but I do not think it is due to my celebrity... It comes from my character, I'm pretty independent, ambitious and I'm not the type to compromise with men who have crossed my life. I have a fault, I have a certain tendency to mix my artistic life to my womanhood. It is a mistake, I am aware and I will try in the near future, to maintain romantic relationships with people outside the show business.

What do you think men version of the 80?
They are all very different, there does not exist a man who symbolizes the Eighties. In addition, I hate generalisations. So I would not say anything about it ...

And women, have you considered becoming a housewife?
My mother made this choice, it is not mine... She comes from a different generation, and at the time we educated the girls so that they become wives tale of the house... I have a rebellious side, I hardly appreciated the pre-established rules, whether in the area of the school of religion or marriage... I think that man is born free and chooses his destiny.

What do you think of the French?
I love your country, I may have noticed that here, when one becomes famous, you're actually treated differently. It is as if you wore in the footsteps of dollars on your face. At home, it is something else, perhaps because we are accustomed to the fact that there are more artists I don't know. However, I love to come to France because I can really measure my actual popularity. Here I am treated like a real queen and I admit that it is not unpleasant.

What are your plans?
To climb on stage alone and without Michael Jackson. 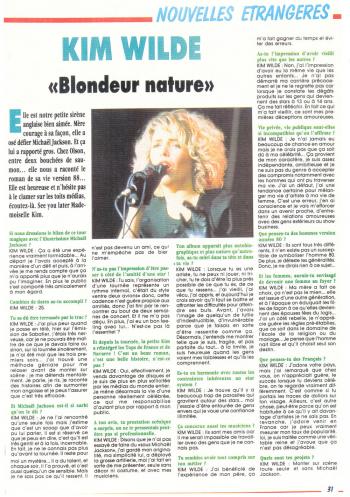