"...I got my Dad an extra large Desperate Dan T-shirt and I got him a book on China. Very thoughtful gifts I think. Busy as I am, I find the time..."

Full name: Kim Smith. I think I was supposed to be given a middle name byt they, em, forgot to put it on the form. I was named after Kim Novak ("famous" actress type). My parents were into calling their kids after stars of the time and I think they considered calling me Doris after Doris Day (yet another "famous" actress). Doesn't have that certain ring to it though, does it? Doris Wilde...
Born: November 18, 1960 in Chiswick, West London.

Do you have any brothers or sisters?
Two brothers: Ricky who's 27, little Marti who's seven and one sister, Roxanne, who's nine. Last night I went up to see their school's Christmas play. Roxanne was a snake and Marti was an elephant - they did a Christmas version of Jungle Book. When I was at school I was Mary in the nativity play. I got the solo part quite a lot of times because I had such a good voice you see. At least I could sing in tune, which is something I noticed with the kids last night, you know? They were dreadful singers! I've got high-standarditis, I have.

What did you buy your mum for Christmas?
I bought her a wine coler, which is this plastic thing that keeps wine cold without having to put ice in it. What else did I get her? A really nice photo album. I got Dad an executive golf club kit, which means you can play golf in the room because it's so miniature and I also got him an extra large Desperate Dan T-shirt and I got him a book on China because he wants to go there. Very thoughtful gifts I think. Busy as I am, I find the time...

Which part of your own anatomy most resembles Michael Jackson?
Well, having only seen certain parts of Michael's anatomy, that does limit it to a few things like his face, his neck, his hands. And I did see his chest once, which was a thrilling moment. My chest is in no way similar to his however. His is flat and mine, um... isn't. Definitely not his nose because his turns up and mine is just... perfectly formed! Hihihihihhhaaaaha!!! His curly hair, no, so that leaves us with just the ears. The ears it is then...

Have you ever stepped on a live jellyfish?
Nope. The closest encounter I've had with sea-life was... when I got in the sea once and on the bottom I saw one of those fish that are very flat and have a sting in their tail, and they're bloody huge and they kind of like go along the bed and they can give you a very nasty shock if you stand on them. I got back into the boat in a matter of moments, I can tell you....

Are you any cop at draughts?
I used to be very good at draughts as a child. What's that other game that's like draughts except it's a bit posher? Backgammon! Yeah, that's a good game, a matter of character it is. Interestingly enough, backgammon is called "Shushback" in Arabic. (??)

Have you ever given anyone a lump of peat on "Hogmanay"?
No, I haven't. That's just a Scottish tradition I think. I've had people brushing out the old year with a broom and stuff, y'know. It's like symbolic, because you brush the old year out of the back door. My only New Year ritual is drinking, ha ha!

What are your ten favourite four-letter words?
Hihihihi!! Love, that's one... Food?... eeurmmmm... um, there are hundreds, but... July! That's a nice month... Wine, which I enjoy drinking... in very small amounts of course... TOTP! (i.e. Top of the Pops) which I like being on, and... urmmm... Todd! That's the first name of my favourite songwrite Todd Rundgren... Marc, that's Marc Chagall who's my favourite painter. He's from Russia... Fish, which I love eating and I love looking at, especially Koi fish, which are like gigantic goldfish from Japan. Cats, which I like too. My sister's got one called Lamb, which we're going to have one Sunday lunch with mint sauce hihihaaahaaa!!!... and the tenth four letter word is... Lamb! Because it's a cat of course! (?)

Would you eat a raw pork sausage for ten pounds?
Himmhirm... How much would I eat one for? Ah! Urmmmmm... no, not for a hundred pounds. It's only a raw pork sausage you say? Only??? Hihihii... no no... A thousand? Mmmm... yes I would do it for a thousand because then I would give it to a good charity. But for myself personally I wouldn't do it for any amount of money. Not even if I was offered ten million pounds, unless I could give it to charity. I'm not totally in love with money. I haven't had any added happiness through money. I'm not denying money has no place in my life, but I have no illusions about it.

What are Calvin Hayes' most appealing qualities?
Hihmmmmhimhimhimm!!! Ahaaa, oh dear... too many to mention! He's very very very funny. Makes me laugh... Are the stories in the press about me and him true? Mmmmmm... might be, might not be! I can't tell you... That's my final word on it. Absolutely. I never talk about my love-life. I am remaining tight lipped about the whole thing... 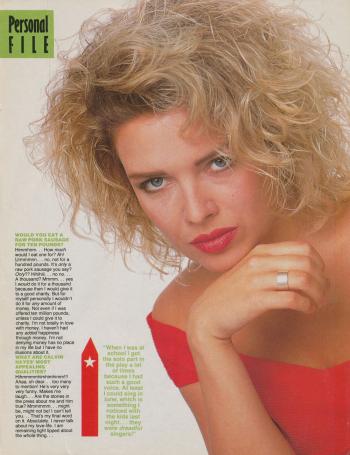