Kim Wilde takes part in the biggest show in the world

One year of absence since the duet with Junior, Kim Wilde seemed to have passed in the great mill of oblivion. It was without counting with the catching temperament of the pretty English blonde. She returns today to the load with a new album. We met her for you.

So, a year without doing anything again, why?
Well I worked on lyrics and music and believe me it's not easy! Especially since this is the first time I get involved with compositions. One day you have the inspiration, the next day you find that what you wrote is null. Finally, it's a real puzzle. We stayed three months in the studio, including mixing, which is very short. We have eliminated a maximum of titles to keep a unit to the album that could be called pop-soul.

So if I understand correctly, who says album that comes out also says turned to the key?
Indeed, I am very proud to make the first part of the biggest show of the world: that of Michael Jackson. I'll be on tour, then, until September. Then, hello sadness.

How did you get this plan?
Let's say that Rod Temperton who had worked on the album 'Thriller' is an old friend, and that the deal was arranged like that, by knowledge, then. But in fact nothing depends on me I swear.

It must be very agonizing to do his first part?
Precisely, my performance is very simple: no special effects, fun, good rock fat. We are eight on stage, including myself. Here is the schema and the overall plan of my show.

So maybe it's a new turning point for you?
No, I think things are changing. I grew up, my fans too, and I hope they will remain faithful to me. Maybe I will recover from the younger ones, I decided to please a public as wide as possible ... Anyway, everything I wrote for the record, I hope it will be a tube in power.

But do not you find the competition difficult, because young kids hang on and really have talent?
Oh, you're right! Especially when I hear the Christians and the Prefab Sprout. These people really have talent. In addition, the boys of the new generation are very cute, which is rather pleasant.

Here, you still love the French?
I love them, they are seductive and much more determined than the British.

But do not you want to get married one day or another?
Oh no, not yet. First I am very good with my family. I have my little universe, my house in the country, my studio, my antiques, my garden, my flowers, and then I'm so afraid of planting myself, you know. Marriage to me is once, and then finished. I want great love, and as for now it is not the case, I keep having fun. I have a lot of comfort, I do the party and I want to travel, but in small doses. When you are on tour for months, you aspire only to one thing is to go home.

Would you like to live elsewhere than in Britain?
Oh no, I love my country, the United States bore me. Finally, especially the Americans. Apart from London, I love Paris. I would like to rent an apartment for a few weeks and make parties with friends. Will you come, I hope?

When you want Kim, I'm waiting for the invitation card. 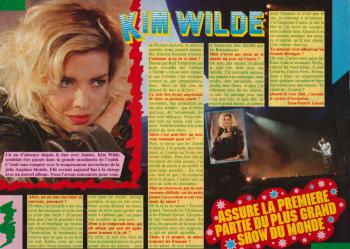