Kim Wilde thought she was 'nothing', but became a world star

You may know the feeling: you think you are slightly overweight, too tall. Others always look more beautiful, more fun and more popular than you are. Kim Wilde had the idea for years. She felt she was 'nothing'. But still, she became a world star. How she felt when she was in school and how she changed, she tells in this very special interview with Muziek Expres.

In Kim's dressing room it's very cosy. The singer is a great mood. Between two bites from her toast with banana (?!) she looks at the Muziek Expres we brought with us.

It's going well with you, isn't it?
Yes, I haven't been so happy in ages. My singles are doing well and since my tour with Michael Jackson I get more international recognition. Privately it's better than ever too.

We show Kim an eight year old photo, from the time of her first hit, 'Kids in America', on which she is pictured with Calvin Hayes (now in Johnny Hates Jazz, then in her band). To our surprise she doesn't recognise him at first, then she screams: "Oh, it's him! How nice!"

There are rumours that you are getting married, but also that you're just good friends.
I don't like to hand out details about my private life. We aren't getting married, but I can tell you that we are very intimate. (Talking faster:) We weren't like that in the old days. Calvin is the son of Mickie Most, who discovered me. He used to be wild and crazy. We hadn't seen one another in a long time, but last year we met again and I loved seeing him again. He'd become very adult in the mean time. Calvin has always been in the shadow of his father. He had the feeling he was nothing and it made him very rebellious. Because of his success with Johnny Hates Jazz he's become the kind, intelligent, loving person he really is. I instantly fell in love with him.

You used to be very different yourself back in those days.
Yes, that's true. But that is a long time ago. When I was fourteen I was very unhappy with myself. I wasn't very good in school, even if I did my best. Art, music and sports, the subjects I was good at, were unimportant in my school. I also felt I was very unattractive. I had ugly hair, I felt I was overweight and I was taller than most people in my class.

Did you have friends?
I tried to be with the popular group at every cost. I succeeded, but it didn't make me happier. I thought they were more fun and happier than I was and I felt I had to walk on eggshells to be accepted.

When did that uncertain feeling pass?
After getting my O-levels that group left school. I stayed in school to get my A-levels and I chose the subjects I was good at, like art. I felt freed and for the first time I dared to buy the clothes I liked. I had my first real friends in school.

And a first boyfriend?
(laughs) Yes, that too. When I was sixteen, I had my first boyfriend, a relaly nice boy. I think that mattered. Anyway, things took a turn for the better since then. I still am in contact with my old school friends. With other people I often don't know if they want to be with me or with someone famous.

Don't you have friends in the artist world?
I am good friends with Elton John and his manager. With Jaki Graham as well. I went out with her and her husband a couple of times.

You have had some problems with your weight from time to time, haven't you?
For years I have tortured myself with all kinds of diets, because I had to be as beautiful and as slim as a model. But I love a good wine. I love eating and candy. Oh, and I think eating is a good way to avoid the problems this business brings. I have to diet once again unfortunately, because I want to lose a lot of weight.
Ah, so that's why her dressing room is filled with fruit. Kim is a bit round, but it suits her really. 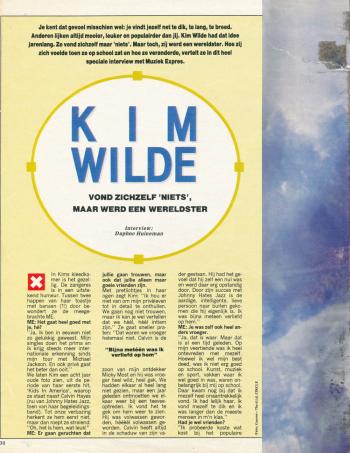 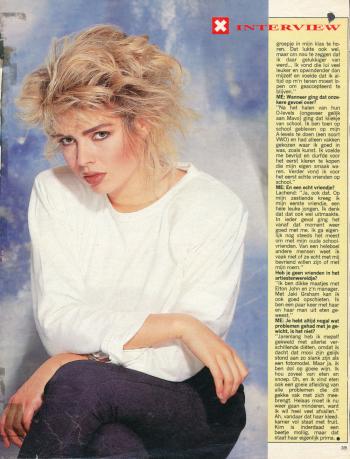