First 'Hey, Mr. Heartache', then 'You came': two songs from her latest album, 'Close'. The beautiful Kim Wilde has finally managed to become a famous person in Italy. Thanks to her voice, physical appearance, but perhaps, too, the popularity gained by accompanying Michael Jackson on tour....

How was it, then, this adventure with Michael?
It was really fantastic! The tour lasted five months, we did 35 concerts to an audience of over two million people. I really enjoyed it... and now I feel a little 'nostalgia'.

Some time ago, right after the concert in Rome, you told us that you had not yet made the acquaintance of Michael. Did you do it afterwards?
On one night I got up and went to knock on the door of her dressing room. He is a sweet boy, very nice and gentle, but also terribly shy. It was nice to meet him. But the boys of his group are nice types: Working with them was a lot of fun.

And how he behaved the public concert, to you?
They have always been very friendly. I knew they were there to see and hear Michael, not me, but also went very well. And then it was very useful for my career, to be able to learn from so many people.

So it is not true that you were very disappointed, thinking about abandoning your career as a singer?
But no, it was a joke! It was my father who put out the word. I blamed a lot for this, but he told me to have wanted to do to spite the press, said that many British newspapers already disclose false information in a more certain that they were not damaged ... You know, my father and playful!

Your father and your brother are working closely with you. How does your team function?
It started a few years ago. My brother wrote songs, and I went into the studio with him to record one that was titled 'Kids in America'. That piece was to get hold of his first recording contract, and let me start the activity as a singer. Now my brother is always by my side, and my father, who writes songs with us and acts as my manager. But for some time I started to compose myself - 'Hey, Mr. Heartache' and 'You Came' we have written together - and I am now much more involved in the musical choices that concern me. Because for me, music is important, not just a pretty girl that makes her figure on the cover and in the photo!

So you do not believe that physical appearance has helped you?
I do not say this... but what counts in the end, and especially your credibility as an artist. So to please men, and I confess that I like to be fascinating. But look, the face, a beautiful body is only part of the show. To stay afloat, you have to be good. And I think one has to become better and better.

Did you expect the success of this album?
I'll be honest: yes. But I confess that I did not think 'Close' would have entered the charts in Italy. And adess geese and success, it makes me very happy. Also because I love Italy: as a child I was often there on vacation, skiing in the mountains, and I have great memories of those times.

By the way, when you concede a little rest?
Ah, now I have forgotten the meaning of the word 'holiday'! But I hope that, at least at Christmas time, I can give myself a break. I'll stay with my family, but I will not tell anyone where you're going. Disappear for qiundici days.

We heard you there like the country: and you?
A few months ago, before we start the tour with Michael Jackson, I spent a week in the countryside, on the farm of a friend, along with some old school friends. This friend of mine raises sheep, and we spent a lot of time helping to mark his flock. It was very funny.

Have you thought about maybe going to live in the country?
Well, maybe I'd like to... I do not know if I can stay away from the big city long enough. And then the work of the farmer is very hard... although what the singer does is no joke either! However, I'd like to at least have a house with a big garden, so we can keep many animals.

Do you do any sports?
I swim a lot. Swimming and a complete sport, and also easy to practice. I could not jog... I would be stopped constantly by people asking for autographs! And then, in the pool you can see a lot of beautiful people...

Continue to paint as a hobby?
Yes, of course. All artistic expressions fascinate me: painting, theater, dance, and of course the music.

When a character the likes of Kim Wilde visits to Deejay, who always shows all the tunes and indeed no curiosity as possible. We offer you a couple of questions that radio listeners have turned to Kim.

Lilly, from Tortona: "Did you expect the great success of this album?"
I never expect success when it comes and always a little surprise for me. But the most surprising this year, and was especially successful in return, after a career spanning eight years.

Mario, from Turin: "What do you think of house music and acid and that went a lot this year, especially in England?"
Not vad omolto disco, because I am ashamed when I recognize, but I really like dance music, particularly acid-house: in England I tune on pirate stations that transmit continuously. I also really like the disk of the Pet Shop Boys, which summarizes suits dance trends of the year. 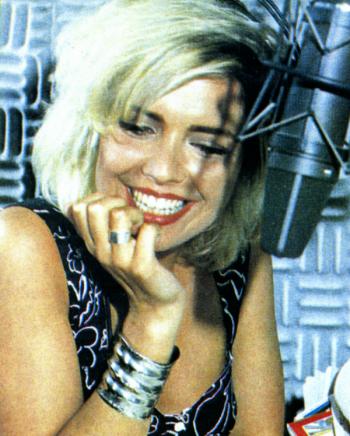