Kim Wilde has a hobby besides singing which she can't get enough of: playing in the lottery. She's been doing that since she was eighteen. But Kim had never won anything. That changed last October, when the mailman brought her the pleasant news that she'd won a thousand pounds in the British Lottery. Kim decided to use the money to have a local clubhouse refurbished. That was possible for this amount of money, because lots of volunteers contributed, so that only the materials had to be bought. The locals were very happy with Kim's gift, who decided to keep competing in the lottery. Whatever would she do with her next prize? 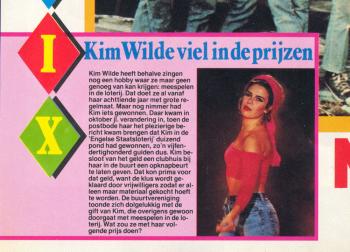