After many discussions, it is finally Kim Wilde who will open, in the first part, the European concerts of Michael Jackson. An unexpected chance for the blonde and pretty Kim, who takes the opportunity to promote the titles of her latest album. For Spot Light, it is explained...

If I had been told a year ago that I will be playing the first part of Michael Jackson, I would have laughed. And, still today, it troubles me. But I find the idea great!

Was it Michael Jackson who made the choice?
No, I do not think so. In fact, I don't know anything about it! But I will try to ask him the question.

Have there been negotiations?
I am not aware of all the details. It is our respective managements that agreed. But I know they watched clips, listened to records ... I wasn't the only one on the list! Finally, their choice fell on me, because I already have a great experience of the scene, that I know perfectly all the constraints of a tour.

Did you make your decision quickly?
Oh, I didn't hesitate a second! It is a great chance, and I did not want to let it pass!

How do you feel?
A little nervous, but I think it's normal.

Have you met Michael Jackson before?
No never. And I must say that this also gives me nervousness. He's a King! Even if we say eccentric and bizarre, I'm sure he's very nice.

And you had already seen it on stage?
Yes, during his previous tour. At the time I had completely cracked. Her show was fantastic, like a fairy tale. It is truly exceptional, you know! A genius.

Were you able to prepare your show quietly?
We didn't have much time. But as I returned from a tour in the USA, it was not too serious. The show is already running. I have a group of great musicians and between us it's perfect harmony. We're going to have a blast!

Happy with everything that's happening to you?
Oh yes! Because I know I'm very lucky. 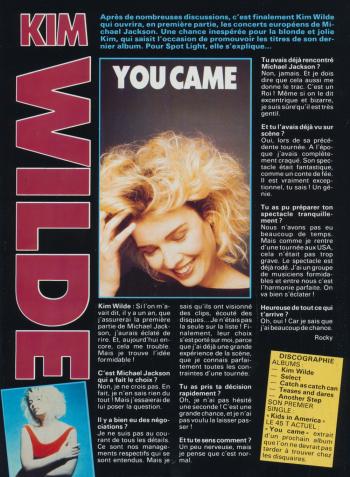