Kim Wilde acknowledges: "I never expected that I would become a star!"
"Now I've finally grown up and I know what I want. No one can tell me what to say and what I should do. I make music now more on my own terms than ever before."

For many, the name of Kim Wilde comes to mind her a fresh appearance, not so much for her music. Kim is able to sing, of course, there is no doubt about it, but the attention will only grow attached to the first of his light-colored hair and Sievi face.

Image is a shield

Kim spent by seven years in the music business circles have taught her that the appearance should be utilized, if it is once there. However, this is on Kim's own terms. She may indeed be a charming blonde, but stupid she is not in any way.
"I have the face of the natural Kissing, and then when I dyed my hair blonde, it was aware of the full impact. Since then, no one has taken me seriously anymore. All seemed to think that I was completely stupid and brainless", says Kim. She decided to keep track of Marilyn Monroe and Debbie Harry's well-known peroxide blonde footsteps.
In humans, there is usually a lot of prejudices, whether they are attractive blondes or different races or religions, or even vegetarians.
"On the one hand yes, I knew what I was doing, I wanted that particular platform, therefore, that there would be a good start to rise. Image is for me kind of protective shield. I know that sexiness and blonde hair make her store, in the sense of doing their trade, in the sense it was a piece of cake for sure, but I think yes, this image also suits me."
Disc sales, it at least does not harm: with the exception of a few that fell through, Kim has been a constant name in the charts after she popped on the surface of the single Kids In America in the first half of 1981.

Kim did not lose heart

Kim is the first one to admit that her way in music has seen more bends, but she is strong-willed, which does not discourage easily.
However, it is the perceived loyal fans who have encouraged her to continue, and the song, which he achieved worldwide success was descriptively titled You Keep Me Hangin On. Kim's version of that old '60s Supremes classic-raised girl again lists in England and the rest of the world got interested in her. The single became the number one in the US.
When Kim's popularity began to wane after the Kids In America, she hired a special office to refine their style to her new imagea the end of the year 84. However, the end result was that the new image was ill received following successful singles. Kim soon realized that his carefully planned image was bad wrong move.
"The record company saw me strong, feminine and bold, he recalls. I myself again, I wanted to provide people with just pure entertainment with no more messages. The whole image began to seem boring and cheesy, I hated to maintain the image of myself, and I began to hate the whole thing. And then all of a sudden I got to read in the newspapers that my career was over. It depressed me a lot."

Kim still says she does not intend to give in, in spite of adversity she never gives up. "All the records that I made wondered at some stage of his career, that they never reached the top. You can not always be number one. Although the British public did not care much about me during those hard times, I had loyal fans in Europe, and it made me continue. Now I've finally grown up and I know what I want. I want to know what our looks and sounds like no one can no longer lord it to me and say what I should do. I make music now more on my own terms than ever before."

Boyfriends have always been on offer to Kim more than enough, but so far she has established a career first. She has had many years of relationship with saxophonist Gary Barnacle, but Kim does not intend to take on a new experience. "Marriage or boyfriend requires a lot of time, and I think I'll be too selfish to give up my time. I'd rather sacrifice my time on my career. I want to be free, the woman that makes him so as to amuse themselves. I do not want a boyfriend who asks all the time where I've been and why I spend so much time with my girl friends."
Kim lives alone, but keeps in constant touch with his family. Choice does not seem to be a little worse, because his mother Joyce acts as his manager and father, Marty makes songs with him.
Kim is in any case happy that he has gotten rid of the picture, according to which he would be the little puppet of a former pop star father, who is not self-determined actions. Kim herself has become a pop star.
"I still never thought that I would become a star", she says. "I do not have anything against success, it's nice that for the most part. However, it also has its own drawbacks, but as long as I keep in my mind that I am in this position only because I want to sing and I love the occurrence of, for sure I can manage very well."

Although Kim has already enjoyed a number of hits. "It's not simply good luck that I am still involved in this seven years after the first hit", she explains.
"I've worked really hard for my success, and so have been around for a while. Success, however, is a strange thing. Part of me believes that it is sustainable for me, but the other half of me suspects that it may be lost even if already tomorrow!" 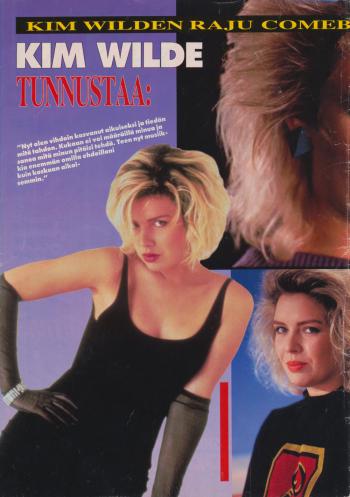 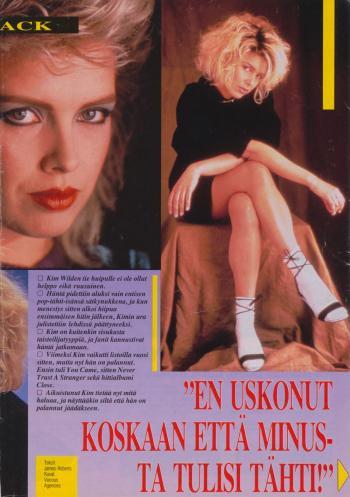 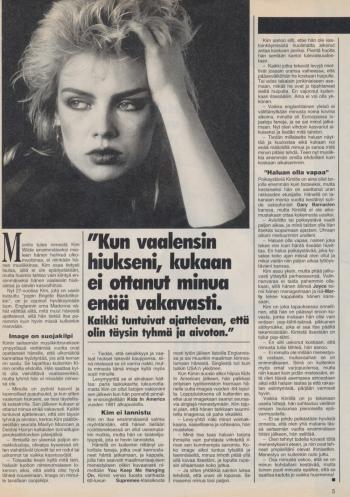