Kim Wilde has demanded an inquiry after an amazing bungle ruined one of the biggest nights of her career. The 27-year-old blonde was furious when she bounded out on stage for her opening night as support act on superstar Michael Jackson's sell-out European tour. For the gates to Rome's 36,000-capacity Flaminio stadium had not been opened and she was forced to sing to just a few people. Fans weren't let in until Kim was well into her third song and the stadium was still only half full when she finished her 45-minute spot.

Kim, close to tears, stormed off stage and boycotted a 250,000 after-show party in a 14th century palace. A tour spokesman said: "It's true that the main gates weren't open when Kim began her set. But there were plenty of people watching by the time she was into her stride." 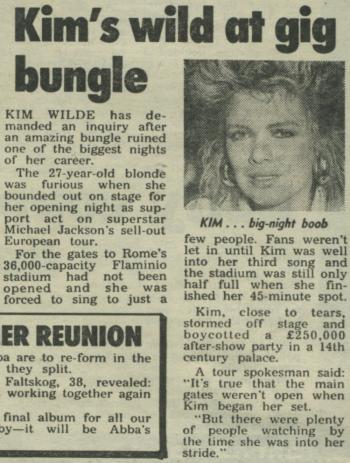