Kim Wilde is back with a catchy new single called 'Hey Mr Heartache', and we can expect an album and tour later in the year. Frontline had a chat with the lady herself about a few bits and bobs.

"I make my acting debut in this one. I decided that rather than waste millions on making a film and discovering that I can't act, I'd waste a few quid on a video and see what people think. It's very dramatic. I run all over the place having tantrums and screaming. It's very strange, acting. Pretending you're in love with someone you hardly know. Especially the kissing bit."

"I like getting older. Each year, life's questions are answered and things become a little clearer. I hope to still be around in 10 years' time, but there again, I'll be 37. You never know, though... I might do a Cher on you all!"

"I still like my song 'Kids In America'. I'm just waiting for one of theose new bands to cover it. Someone like Jesus and Chain Mary Gang, whatever it's called... Jesus and Main (bursts into hysterical laughter and puts on a granny voice)... what's that new-fangled pop band called, the one that all the young people like these days...?!" 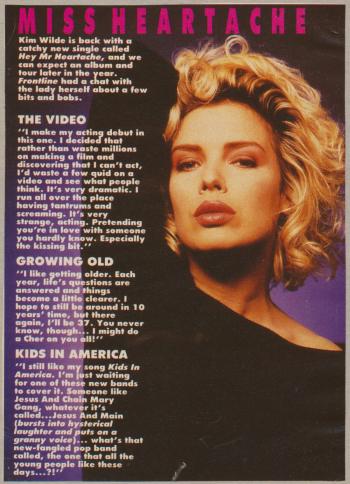