No Wilde oats round here

Moving on from teeny bopper pop, Kim Wilde is getting into classier groove. Life may switch from frantic recording sessions to periods of strained creativity, but, as Nikki Groocock finds out, whatever she does Kim won't forget her pals back home.

Kim Wilde shot to fame in 1981 with the teenage pop anthem, 'Kids in America' and soon became a household name. Then, after a run of hits, her populartity dwindled and her recording success was somewhat limited. But in 1986 she had a worldwide hit with 'You keep me hangin' on' (which was Number One in America, Australia and Canada), followed by her duet 'Another step' with Junior, and 'Rockin' around the Christmas tree' which she made with Mel Smith, in aid of Comic Relief. And now, not only is Kim backing Michael Jackson on his European tour, but her new album, 'Close', looks set to be her most successful to date. But far from acting 'the star', Kim's social life still revolves around girlfriends from her hometown, who she fondly refers to as 'The Biddies'.

'I don't think I'd have enjoyed being a pop star if it wasn't for the girls. They share everything with me. I have friends that I go round with from the music business, but on a day-to-day basis, it's Kath, Claire and Julie I spend my time with.'

'Close' heralds Kim's move away from teeny pop to a much more classy sound, and her ability to adapt and mature with her music, has probably contributed to her successful staying power. 'I really think it's all too easy for people to dismiss you in London as there's always somebody new just around the corner, ready to take your place, but I've tried to adapt and develop my own style. It may not have always been in the 'best possible taste', she says in Everett drawl, 'but I hope I've managed to move forward with my music rather than repeat myself.'

It isn't only 'The Biddies' who keep her sane though. Father, Marty, a famous singer in the Fifties and Sixties, has taught her a great deal about surviving in the cutthroat world of rock 'n' roll. 'Dad was a huge success and a has-been in some people's eyes, but her managed to come out of the showbiz merry-go-round a brilliant performer. He's witnessed, first-hand, all the good and bad aspects of this industry and has helped me cope with it myself', she says.

And brother Ricki has played in Kim's band, and written material for her too. This close-knit family have even set up their own recording studio near their family home in Hertfordshire. At the moment, Kim's life is incredibly hectic as she's promoting her new album, and has just finished a long stint in the recording studio. 'My life seems to seesaw between slow periods which seem to drag on, when I'm either writing or stuck in the studio, to manic periods when I'm full of beans and raring to go, but have no time to go out. It's really nice having every day completely different from the last, although it can be quite insecure sometimes. But as I get older I'm better able to deal with my doubts about the future.'

When life has calmed down a bit she'll be ready to hit the town with her pals again - fortunately they all have pretty unconventional jobs as well, so they're all able to fit around each other quite easily. 'There's a whole group of us who are from Hertfordshire, but live in London, and we go out together when we can. I like going to small restaurants for a quiet meal, or dancing at the Wag club in Soho', she says. 'When I'm stuck in the recording studio I hardly get out at all, except for a wild night out with 'The Biddies' now and again.'

As soon as the warm weather comes, Kim packs her bags and heads back to the country. 'I love being in the fresh air in the summer. It's such a waste being couped up ni London.'

Exciting and hectic, her life may be, but she's the first to admit it does hinder romance. 'Relationships with men can suffer as a result of being so busy, but at the moment it doesn't bother me at all. I have no intention of getting married for quite a while, but I do have male friends who I care a great deal about.' She smiles, but is determined not to be drawn any further on the subject of love and romance. Moving swiftly on to the topic of clothes, Kim enthuses about the shops in the Portobello and Notting Hill area of London, but as with everything else, complains that she hasn't got as much time as she'd like to dedicate to shopping. 'I have a casual, masculine style. I say masculine with reservations though. I always find women make a more feminine statement through masculine clothes which is what I try to do with chunky, clunky jewellery and dark outfits.'

Kim finds living in London suits her most of the time, and she enjoys the anonymity of the city. 'London is the perfect place to be a pop star, as there are so many about. It makes people rather blasé about celebrities and in turn they leave you alone. I spent some time in America and know that I couldn't live over there - I'm so intrinsically British. I love the different seasons and adore being able to nip between the country and London.'

But doesn't Hollywood beckon? 'I'd like to turn my hand to acting but I'm not sure about Hollywood', she laughs. 'My last video was my first bash at acing - I thought it would be more economical to try out my acting abilities on the video screen rather than waste millions on a film, only perhaps to find out that I'm useless.'

And as for the future? 'Well I'm really pleased with my new album, ans so excited about the tour - I've been playing Jackson Five records since I was twelve, so to be touring with one of them is absolutely incredible! I'd like to work with other artists, like Simon Climie of Climie Fisher, or maybe write songs for other people. I'd like to be involved "behind the scenes" for a change, rather than be in the spotlight all the time.'

Albums
Anything by julie London; Todd Rundgren (Something, anything); Prefab Sprout (From Langley Park to Memphis)

Films
Some like it hot; High society; Letter to Brezhnev; This is Spinal Tap 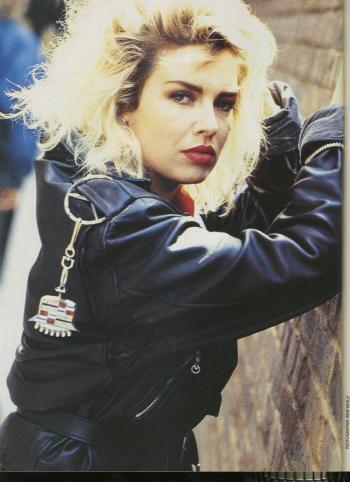 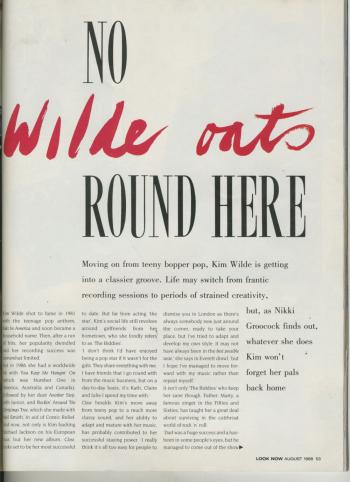 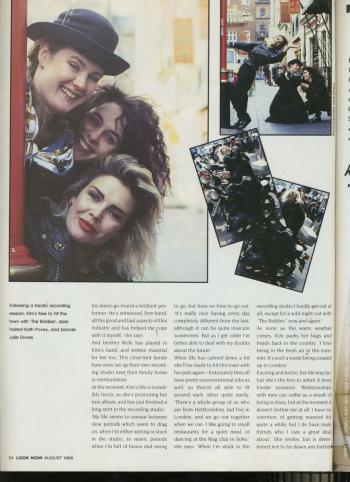 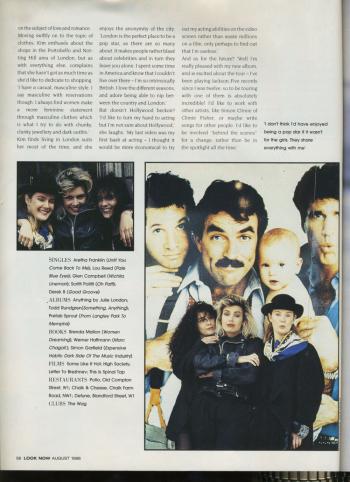