On the Wilde side!

When pop idol Marty Wilde married Vernon Girl Joyce Baker in December, 1959 many prophesied the end of his own career and a short-lived marital partnership. How wrong they all were. They now both astutely guide the successful pop careers of their children, Kim and Rick - and dad's singing as well as ever!

"If I didn't want to work another day in my life, I wouldn't have to", admitted Marty. "So it's a lovely position to be in - but I still love touring and going on stage every night."

Next year he may just take a complete twelve-month break. On the other hand, his loyal fans still expect to see Britain's greatest-ever 50s rock 'n' roller on the road.

"When they are fed up with hearing those boring old songs of mine, I'll graciously put my ego on one side and disappear," suggested Marty. For many he is immortal - and so he should be.

Why have the Wilde family been so successful?
"We've been very lucky, but are not fools and have always managed to stay down to earth and learnt to respect people. If people are fair to us, we are more than fair with them. All we demand is loyalty. We have had our friends for 30 years and employees never leave us. There's your answer", said Marty.

Before going on stage at Warner's, Puckpool, he overheard a fifties record called Poppa Picolino. "The music industry was full of rancid songs like that and How Much Is That Doggie In The Window? That's what rock 'n' roll replaced. There were a few lovely songs of the era, but the music needed to be liberated."

Marty Wilde made his reputation from a hit-run of records like Endless Sleep, Donna and Sea Of Love - and the incredible Jack Good TV series Oh Boy!
"Oh Boy! was the most innovative and advanced TV show there has ever been. It would be very difficult for a pop programme to be that innovative again. They are still trying to replace Top Of The Pops, but none of those bright bucks from London or the North can do it. That's one of the few showcases left and it's mind bogglingly boring - but I like it!" he revealed.

Marty Wilde's songwriting talents, that began with Bad Boy in 1959, progressed via songs like Jesamine, for the Casuals, to the stunning creation of Cambodia and other powerful songs for daughter Kim.

"I'm normally very critical of most of the material I write. I have very high standards in life, ones which I don't ever achieve and Kim does occasionally - and most of my songs never do or just the odd one. I'm a hard taskmaster and get told off for being too much of a perfectionist. A negative aspect of my life is that I can't take second rate."

Marty WIlde can sniff out real talent. He saw the true potential of Cannon and Ball long before anyone else and wanted to manage them but, at the time, just didn't have the experience, time and money needed to market them. Lenny Henry was another he picked out.

"Certain stars are very overrated, too. I just can't stand mediocre talent and people continually raving about them. When this happens I go out and mow the lawn. Sadly, there are no real apprenticships anymore for youngsters and therefore no standards, so they don't know", said Marty.

Luckily, his expertise, gleaned from some old troupers and a self imposed professional attitude, has benefited Kim and Rick. Currently Kim is supporting Michael Jackson on his European tour, for a reported two million pounds, and is enjoying record success with her latest album, Close, which dad rates her best work ever, and the single You Came.

Rick, a one-time member of his father's backing band, is now a top songwriter and a brilliant record producer. The new young Wildes, Roxanne (8) and Marty (7) are a little too young to be in on the act. They were looking forward to their Isle of Wight rock!

What are dad's ambitions for Kim, now with more record hits than her father?
"Personal happiness in her own life as well as in her career. I hope she doesn't become too cynical. I'm over cynical but not bitter, and I hope she can take things as they are."

Marty was never really that keen for Kim to follow him into pop music. "It's not a girl's business and never has been", he said.

When he was 14 Marty visited Warner's, Puckpool, for a family holiday. On that occasion they caught the bus from Ryde. This time he drove his red Mercedes 5000 and rang his mother from his in-car 'phone. That first trip was over 30 years ago. He came second in the Puckpool talent contest.

Whatever happened to the winner? It must have been the only time Marty Wilde was second best - and he was Reg Smith at the time. 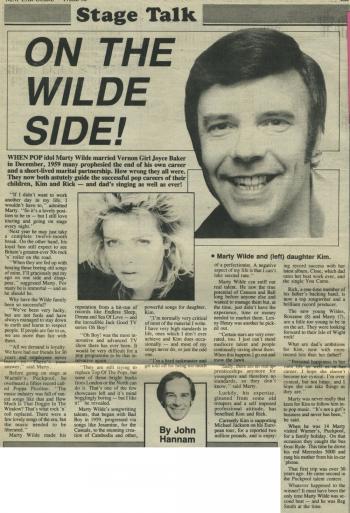