Out to lunch: Kim Wilde

This Friday has been deemed Britain's first Day of Comedy, an ambitious ruse sponsored buy the fun-loving BBC and supported by celebrities, would-be celebrities, rent-a-quote MPs and others in aid of Comic Relief, a Good Cause for which the delectable Ms Wilde will be encouraging us to wear a 50p red nose throughout the day. 'It's very uncomfortable, but hilarious', she claimed. 'You can't help cracking up when you put one on.'

She ordered ricotta salad with pine nuts and a glass of red wine, promised me the first ever photograph of her wearing a red nose and began to read fro mthat ultimate item of carefree fun: a Press handout. 'This is an opportunity for the UK to let their hair down and demonstrate Britain's famed sense of humour...'

Some people will sit in baths of tapioca whilst wearing red noses, she added. 'Not me, though. I mean, anything to get people to smile, but sitting in tapioca is stretching it.' She was dressed all in black - mini, stockings, sweater and earrings. 'I wear black a lot', she giggled. 'I'm sure a psychoanalyst would give you a ver ygood reason for it. But it's slimming and timeless. I don't like to look trendy and I'm always suspicious of people who expres themelves through clothes. My clothes don't tell the whole story about me. I don't want to create a mystery. I just try not to diminish my natural mystery. I'm a bit of a sucker for glamour and have dyed my hair since I was at art college. I was born to be blonde and had a bright mass of curls when I was younger. Then this bloody English weather destroyde it. But my personal life is always at odds with my sexy public image. I don't regret it. It might be a bit of a barrier with some people who think of me as a blonde sex kitten, but anyone worth their salt can see though that image.'

She toyed listlessly with her meal and said the restaurant was a bit fancy. Ideally she would have lunched in Rome. 'Italian food is the best in the world. Also, I'm not terribly popular there, so I'm not, like, ogled.' I assumed she'd be ogled anywhere. 'Are you flattering me? When people stare, I never know if it's because they find me attractive or because I'm famous.' She is one of those curiosities - a pop star who really doesn't discuss her private life. A current boyfriend? No comment. Marriage? Not at the moment. We turned to other topics, and at last the contrived flirtatiousness and jollity evaporated.

'Since I became involved with Comic Relief, I've felt I live in a selfish society', she said. Most of the money raised this week will go to Oxfam and Save The Children Fun for use in Ethiopia and the Sudan. One-fifth will help young people living in the UK. 'There are 50,000 of them homeless in London. I used to have the attitude, 'Why don't they go home instead of being a burden on society?' I didn't think that they might not have a home to go to, that quite a few were abused, and some parents don't want their kids. Often, they come from areas where there's zilch employment. They've got on their bikes, come to London and found nothing. I've met them and they're horrifyingly normal, sweet and afraid.'

She's asked about music, and what Samantha Fox is like. ('I say she's a really nice, sweet girl'). She goes on: 'It breaks my heart to see these talented little kids going through this hell. I'm not going to sit here and be anti-Thatcher or anything, but there seems to be an awful lot of poverty in the country, and it's being hushed up. I love working with young people, and I often ask myself why I continue singing. Then, whenever  Ihave doubts, I look around where I live - and it's, like, full of music. You can't get into my car because of cassettes. Even my handbag is full of them. I'm totally music motivated. Funnily enough, the times I get most insecure are when things are going well. That's because I'm a realist. 'Life's a bitch, and then you die', they say, but I don't believe it because I have good times, I am a most happy young lady, and I'd like to help others to be the same way.' 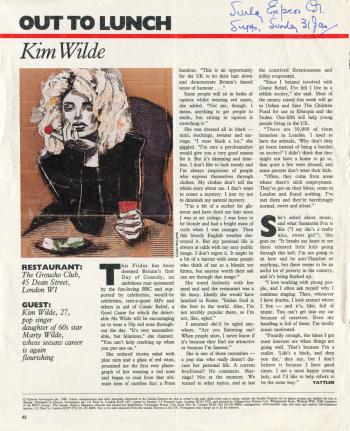