Name: Kim Wilde
Date of birth: 18.11.1960
Place of birth: London
Hair colour: Blonde
Colour of eyes: bluegray
Height: 1m70
Hobby's: Fashion, music
Parents: Father Marty Wilde was a famous singer in the period 1958-1962 but now produces and composes for others. Mother Joyce Wilde is housewife.
Siblings: Ricky Wilde, her most famous brother is one year younger. Marty is 5 and Roxanne is 7.
Life story: Kim Wilde has an image that appeals to both boys and girls. She doesn't behave like an unapproachable star but as a regular, modern young woman. When she was 20 she got the taste for success with 'Kids in America' and 'Chequered love'. After that hits like 'View from a bridge', 'Cambodia', 'Love blonde', 'You Keep Me Hangin' On' and 'You came'. In 1988 the shy, blonde star stood in the support act for Michael Jackson. Together with TV comedian Mel Kim records a single in 1987: 'Rockin' Around The Christmas Tree'. The proceeds go to charity. She also sang on the Ferry Aid single 'Let it be', benefiting victims of the disaster with the Townsend Thoresen-ferry in Zeebrugge. Kim doesn't have a steady boyfriend at the moment. She doesn't really hate men, but she is demanding. One of her ex-boyfriends Gary Barnacle, saxophone player, can talk about that. In 1988 Kim Wilde is still on the top of the charts: 'Close' is a first, but certainly not the last step to her independence. 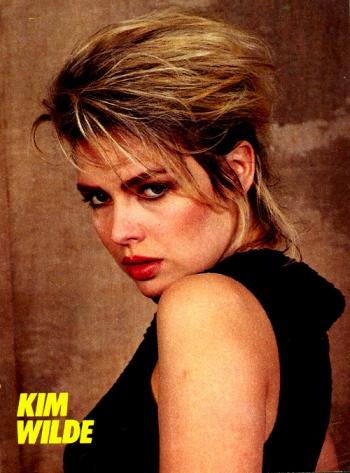