Perfectly styled blonde hair and luscious pose à la Marilyn Monroe: so changed presents Kim Wilde (27) herself - the english pop girl with the once cool image now with a sexy look. And just as changing is her career: in 1981 the single 'Kids in America' made an international impact like a bomb for the until then unknown daughter of he musician Marty Wilde. Three hits followed - after that the big silence. Reason: time and again Kim withdrew from the scene ("I didn't know who I was myself"). Only in 1986 she landed at the top of the charts again thanks to the single "You keep me hangin' on" from the LP "Another Step". Then another radio silence for eighteen months. Now Kim Wilde is starting again: with her band she is playing in support of Michael Jackson (until 4.9 in Germany). And the single "Hey Mr. Heartache" from the LP "Close" is getting in the charts. Kim (Birthday November 18): "I am a typical Scorpio. For me there are only extremes." And that also rings true for men. After hot affairs with Lennon-son Julian and Delon-son Anthony, Kim is single right now. Only her longstanding friendship with Calvin Hayes (24) is still on. "But I am not in love with him..."
See and hear Kim in Germany during the Michael Jackson concerts on 1.7 in Hamburg, 3.7 Cologne, 8.7 München, 10.7 Hockenheim-Ring, 21.8 Würzburg, 2.9 Hannover and 4.9 Gelsenkirchen. 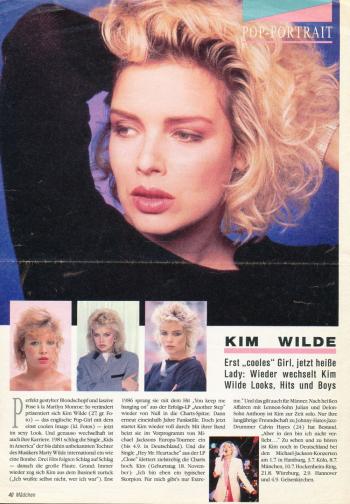