From punky power popper to the sophisticated stadium act supporting Michael Jackson, Kim Wilde has come through a lot on the road to pop stardom. Johnny Dee braved her army of photographers and stylists to try and unearth the real Kim Wilde.

What's the link between Mel Smith, Jimmy Greaves, Les Dawson and Michael Jackson?
Well, apart from the fact that they all wear white gloves, keep llamas for pets and appear on telly rather a lot, the common factor is that they've all had the pleasure of working with Kim Wilde.
Kim is less of a pop star these days and more of a showbiz celebrity - hence the appearance on 'Blankety Blank'. After all, it takes more than top 10 hits to join the ranks of Lorraine Chase and Bonnie Langford.
Perhaps without the glitter, exposure and limelight of the Jackson tour she would have disappeared or become a daytime TV chat show host (something she'd be very adept at), but it's highly unlikely.
Kim is a trouper, she's survived the swings of fashion and attentoin throughout the Eighties. Even without Michael Jackson she'd be a star - she never really disappeared.
"I've survived because I wanted to survive", she says dipping a mini-pitta bread into a tub of bright pink taramasalata. "I believe in myself and my music. Plus I've always had a lot of strength around me."
That "strength" is her family, who have always had a hand in every aspect of her career. From management, songwriting, presentation to production, Kim Wilde is a family business. Together, from the early power pop debut of 'Kids in America' to the uptempo bimbo beat of 'You Came' to the new single 'Never Trust A Stranger', the Wilde hit factory has cunningly kept abreast of changing trends.
"Pop is the only thing I believe in", she says. "I like it because it's happy, because it's a fantasy, make believe world."
Today, between the end of the Jackson tour and a solo jaunt to the Far East, Kim is having her photo taken - not something she particularly enjoys. "It's a bloody pain in the arse", she complains.
Between "shots", we sit in her dressing room - Kim with her fish eggs, me with my nosey questions. Every now and then Kim's flustered American "stylist" flits in and out saying things like, "I think we should stick with burgundy for the next roll, Kim".
He is ne of a team who look after Kim's image - hair, clothes, make-up. It's comepletely ridiculous, but behind the scenes this is what showbiz is all about - making a human being into a Sindy doll.

So what do you make of this Jackson fella then?
He's one of the hardest working people I've ever come across. Anyone who devotes 100 per cent of their life to their career I find a bit strange, but that's only 'cause I'm such a lazy cow. He really is a wonderful performer.

It's been a bit of a running joke that you never actually got to meet him...
I know, it didn't bother me, he wasn't snubbing me or anything. It's just that he's very precious about his privacy.

He must be very paranoid
Yeah, but all Americans are, aren't they? Oooh, I shouldn't say that, my stylist's American. They've all got analysts and stuff, ha ha ha.

Eventually Kim did meet Michael.
It was very short and quick. I can't really give you a thesis on a man I only met for a couple of minutes. He seemed very sensitive, very sweet. He was nice.

How did it compare with meeting Jimmy Greaves?
Oh, Jimmy's a very sweet guy, a big softy.

Is he a fan of yours then?
No, he likes my Dad. He's a real old codger, but then they can't all be Jonathan Ross. It's nice to have someone representing the codgers of this world.

"Sometimes I feel so normal"

A lot of people say that I'm a very normal person and I take that as a compliment. I've always felt at odds with being a pop star. I don't ever forget it but sometimes I feel so normal. It's like this morning, I was trying on this jacket and I said to my stylist 'it's a bit pop starish', and he said, 'but Kim, you are a pop star'.
I suppose I'm a bit of a let down, but that could be the nice thing about me. I'm not a 'here I am, folks' type of person, I don't have an overly high opinion of myself. I'm quite a gentle sort of person, quite funny sometimes, I like people a lot. I'm quite patient and tolerant. I'm a little bit self-centred sometimes, and moany. I hate that about myself. I've got moods that swing up and down but I tend to put on a facade for people so they don't know.
I'm serious - I get upset about things, like all the seals dying and what we're doing to the world. It just freaks me out, it's always freaked me out. I'm a bit despondent about the world ,I haven't got a very high regard for the way humans treat it. It takes something like the seals for people to start doing something about pollution. Greenpeace have been going on about it for years but everyone thinks they're nuts. It took Chernobyl before people realised that nuclear power isn't such a honky idea.
Maybe these aren't the sorts of things I should be thinking about, but when you travel the world you see these things in every country - it's not just Britain and America, it's Switzerland and Japan, everywhere...

Before the ecologically sound, normal Kim, there was the 20-year-old absolute beginner - daughter of Fifties rocker, Marty, who wanted fame and kicks. Her debut single, 'Kids in America' - resplendent with tacky, "oi" backing vocals - made her an overnight success. Now that song is a live fave, but sounds incredibly dated.
I think that's good, it was very early Eighties - post-punk. Acid house is gonig to sound very dated next year. You've got to go with the moment. At the time it was a very exciting, fresh pop record and everybody was jumping on the ceiling.

Did you modl yourself on anybody then?
When I started, Linda McCartney. I really liked Debbie Harry too, but I never modelled myself on her, she was so perfect.

Do you model yourself on anybody now?
Sometimes you can pretend to be other people for videos. For 'Say You Really Want Me' I thought it'd be fun to do a take off of '9 1/2 Weeks', so I tried to look like Kim Basinger. I thought, 'why not? It's better than looking like Ena Sharples!'. In the end the video got banned.

Why, did it have bondage and whips in it?
No, but it was a bit too steamy for 'Get Fresh'. It caused a lot of controversy, but that was good in a way. It took the edge off me being the girl next door - which is true to varying degrees.

What's the wildest thing you've ever done?
Oh I don't know, if I was to tell you then people would think I was a pervert. I'm not about to tell the world what a sordid little madam I am - that's my business. Singing in front of 120,000 people is quite loony.

What did you dream about last night?
Oh, I had a real epic. I dreamt I was in this field and three giant bananas were squashing me.

That's weird because I dreamt I was being eaten by this big lemon cheesecake.
I'm pulling your leg, I didn't really dream about giant bananas.

Be honest, what do you dream about?
Well they're always really dramatic, last night I had a particularly hairy one. I have a lot of dreams about being chased by Nazi type figures. It's quite scary because I know that I'm running for my life. I wake up just before they catch me.

Really?
No, I'm kidding. I dream about bananas.

Away from Kim Wilde, the pop celebrity with her stylists, image makers and showbiz backgrnd, there's a "normal", fun, bubbly person trying to get out. That Jackson fella - he's the one that dreams about giant bananas. 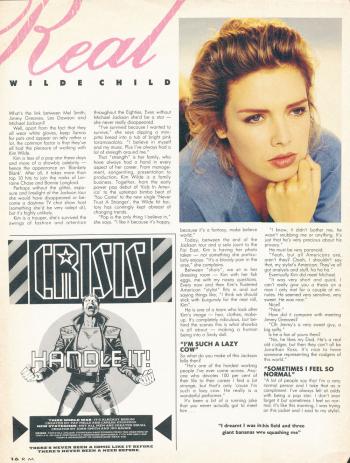