Kim Wilde has denied rumours that she is having a passionate affair with Johnny Hates Jazz star Calvin Hayes. Calvin, 25, is said to have dumped Page 3 girl Christine Peake, 21, for Kim after a six-month romance. But Kim, preparing for her performance at the Montreux rock festival, said: "this is one of Calvin's scams. It isn't true. Calvin and I are good friends but I wish he wouldn't say these things."

Kim, 27, in the charts with Hey Mr Heartache, is fed up with her blonde bombshell image. She wants to break into acting but the only parts she has been offered have been dumb-blonde characters. Kim said: "That is definately not the sort of thing I want to do. It just isn't me." 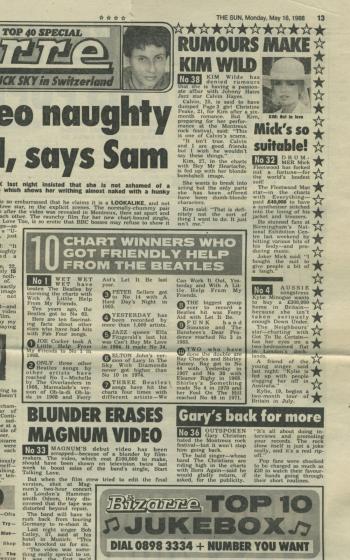