Since months Kim Wilde (28) is in the charts agani. No the cool Kim has also found happiness privately, like se says happily to Popcorn-reporter Norbert Laila...

'Today everything goes wrong!'. Kim falls down into the chair in her dressing room, flattens her hair which has been blown by the wind, and breathes deeply. She looks tired, although it is only two o'clock in the afternoon. With three hours of delay she's landed in Cologne for television recordings. The band with the equipment is still in London at the airport.
'They missed the plane', Kim says annoyed, while she puts her thick red scarf in place. For days she is battling a cold, swallowing pills all day.
'The weather in Germany is just as bad as it is with us in England', she says and orders a glass of lemon tea.
In the charts the cool pop lady has more luck. Three top hit sin half a year, the success album 'Close' may contain even more hits. And a big European tour in support of Michael Jackson. Wasn't she disturbed that fans came for Michael Jackson, and not for Kim Wilde?
'I admit it. The audiences weren't enthusiastic everywhere, but I am totally happy about the tour. I have seen more than half a million people live, I would never have reached such an amount of people alone."

How was Michael as a personality towards her? She hesitates, doesn't want to say anything wrong. "I have rarely met him. The control, the lack of access, it has all worked deterring on me. I was impressed by the professionality on stage, nothing was left to chance. Privately Michael is really a normal person: very courteous, nice, but reserved. I got the impression that things get on his nerves. I wouldn't like to swap places with him.'

Michael Jackson has had operations on him because of his looks. Would Kim ever consider a face lift?
'Why, do I look so terrible?', she asks and then she continues: 'Each to their own. Anyhow I would never get myself a second face.'
Kim rummages around in her make up bag, and takes out red nail polish. She starts polishing her nails. It's a good moment to confront her with press reports about her love life. When she sees the newspaper cutting, she puts the nailpolish aside and reads the report. She is amused by it. Looking at her face and listening to her laughing it is obvious: the reports are right. Kim is head over heels in love with Calvin Hayes, drummer with Johnny Hates Jazz. For over half a year the both have been together. Kim: 'I've known Calvin since I recorded 'Kids in America', so more than seven years. We got involved at a family party, because Calvin is a good friend of my brother Marty.'
And why has she hidden her love from the media for half a year? Was she afraid that it would have an impact?
'When my father Martin, who was a wellknown popstar at the time, got married in the Fifties, his fans were in shock. Today it has changed for popstars. People want to hear good muci, and they're not interested in what happens in the bedrooms of the stars. It's not a question of image, but rather a private business. I don't sell private secrets, I sell records.'
She doesn't want to get married with Calvin yet: 'At 28 years I am still too young.' She enjoys the relationship without a marriage certificate. To be undisturbed by the hustle and bustle of London, she has recently bought and renovated a barn from the sixteenth century in the provence of Hertfordshire. She spends her weekend off there together with Calvin, and she gets involved with her hobby: painting. The rooms in her new home are full of paintings she either made or bought herself. 'Even a real Chagall', she adds proudly.
Maybe a gift by Calvin because of her 28th birthday? Kim shakes her head, doesn't want to tell what Calvin gave her. She spent her holiday in Paris, because she recorded two television performances there. In the evening she had a dinner party at the hotel with friends.
Back to her career. In England a new generation of pop singers is rising: Wendy James, Enya, Yazz. Is Kim Wilde afraid of the competition? 'I've seen a lot of newcomers come and go', she answers. 'The business needs a fresh wind every now and again. Wendy James is a bit shrill for me, I liked Enya's videos. I am enthusiastic about Yazz, she brings enthusiasm and temperament on stage. Even when she's doing playback she gives it her all. I think Yazz is a force to be reckoned with in the years to come.'
The door opens. Kim's mother Joyce, who accompanies her daughter during her travels, looks inside for a moment. 'The band has arrived', she says. 'Great', Kim answers relieved. There's just enough time to write down a Christmas greeting for Popcorn, then it's off to the stage in the TV studio. 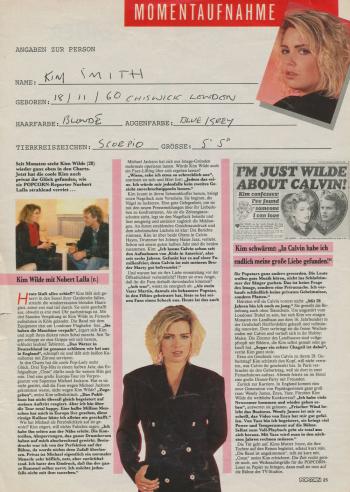