Fancy tea and scones and a good old nose round Kimmy's gaff? 'Course you do! Your guide: David Martin.

"This is part of the main very long room in my flat. It's what attracted me to buying it..."

1. I've just had the shelves put in for my tapes, records and CDs. Everything used to be on the carpet, but I couldn't stand it any longer. These shelves have really transformed my life. I'm very fond of shelves (!). The tapes are quite varied. I love chart stuff DJ Jazzy Jeff and Fresh prince, Rachmaninov and Todd Rundgren.

2. These are my books. I haven't actually got a favourite author. Actually it's Jackie Collins, but don't tell anyone, ha ha! No really, I like books about the environment, books on artists and biographies. I also buy books if I like the cover. At the moment, I'm ready Ben Elton's new book Stark which he gave me a signed copy of.

3. I like this lamp. It actually moves up and down. I got it at the Conran shop but they didn't have the right colour, so I got it sprayed black.

4. The table is made from old pine. I bought in an antique shop - I just love browsing.

5. The mess. I usually leave anything on the table to remind me to do it. There is quite a bit of my mail and the usual bills. Yuk.

6. My record collection. I'm actually an avid collector of my own records. I get two or three of every 12-inch and CD. I started doing it about three years ago after dad (singer Marty Wilde - Informative Ed.) told me that he regretted never keeping any of his records. When I first decided to do it, it meant buying some of the old stuff from record shops. Well, not me personally - I was too embarrassed so I sent someone else in. And that reminds me - MCA haven't sent me my CD single of 'Never Trust a Stranger'.

This is a dress!! (No! - Ed.) It's hanging on the picture rail in my living room because the room is so light.

This is my Yamaha piano - isn't it beautiful? I play a lot but not too much. I used to be quite good at school, but I gave up when I discovered boys. The chair I bought for a tenner. It's actually made from applewood and that means it's quite rare. I found it in a junkshop.
I don't think I've ever worn that hat on top! But it does look nice. That clock doesn't work too well. My dad gave it to me. He's got hundreds of old clocks and watches and none of them work.

That is my very own bureau next to the piano. THat's something else from a junkshop too, and I think it's gorgeous. The vase on the top is a pressie from my brother and the shells I've just collected on my travels. And there's a copy of Interiors magazine. I'm very into interior design. A few friends have asked me to help re-design parts of their flats."

I just adore candles. I've got them all over the flat. The butterfly is a souvenir of Devil's Island where there used to be a prison. It was such a nasty place and yet the butterfly was so beautiful and no, I didn't kill it! The beads are actually part of the collection I had when I was a girl. And the model was made by my seven-year-old brother (Ahhh).

That is Tallulah Bankhead. She was a very raucous heavy drinking woman - I hope I don't end up like her. I got this just because I like the picture.

I like this corner. The top one is a bronze statuette of a woman playing a tambourine that I bought five years ago. I think it's very beautiful. I like female things. Underneath is a blue bottle - my brother and sister-in-law gave that to me as a pressie. The next vasey type thing is art deco and it was given to me by my Mum. And on the bottom is an art deco drame with a picture from New York from the 1950s in tacky colours. I just love it.

You could say my bedroom is like an Indian restaurant. When I moved in, me and some freinds got some special paint made up and painted the walls and ceiling and sprayed the picture rail gold. I bought the brass bed in a junk shop, but it was expensive. The lamp by the bed was the first thing I bought for the flat.
The quilt was from Habitat, but I've gone off it 'cos it doesn't really go with the room. There's a phone by the bed which I always have to have for panic phone calls late at night and for morning calls!!!
They're pearls on the bed. Some were mine and some were acquired when I did the video for 'Say you really want me' just to remind me of two of the best days ever.
I decided to get the mirror after struggling for years with the little one in the bathroom. I thought it was the best thing to do because I have to spend so much time putting on make-up for my work.

I do like lounging about on the sofa. This was one of the first things I bought for the flat. I had it re-upholstered in deep blue slate velvet. The blinds were give to me by a friend. It means I can see into the street, but it also means that people can see in. I really should get round to getting some curtains!!! The table next to the sofa is gorgeous - it's got a star on the top and it's from the '30s. There's a name for the that type of table top, but I'm not sure what it is. 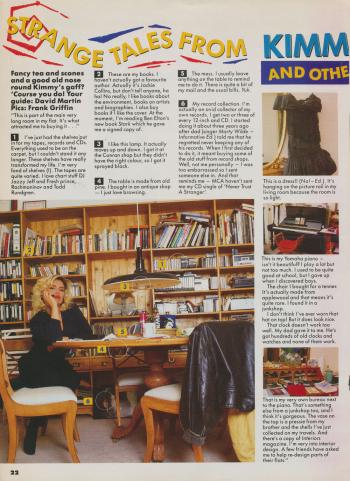 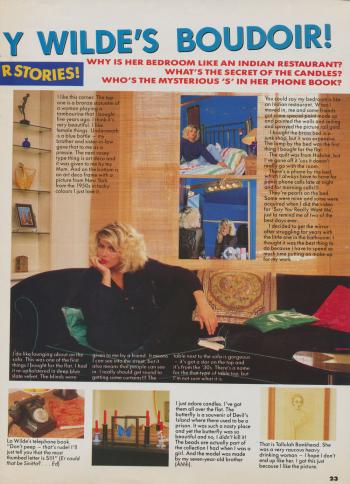