The big Kim Wilde interview: 'Too much has gone wrong, that won't happen to me again'

The career of the British Kim Wilde is now eight years old and has had many ups and downs. Periods of running and periods of standing still. Right this moment she's running around the pop circuit again. With her fresh new LP 'Close' and her side job with Michael Jackson. We had a talk with her perservering self.

The time of our date with Kim was 10am. Er, that's early for some people. Especially when there has to be a lot of talking. And when the person is suffering from the flu. That happened with Kim Wilde. 'You don't catch me on my best', the 27 year old excuses herself.

Are you a morning or an evening person, Kim?
I am not a morning person at all! If I don't have to get up early for work, I tend to spend my mornings in bed. I usually get up around eleven. Unless I'm in the country. It's worth getting up early when you're there. Nature is at its best then. But in the city, as a rule, there's nothing to get up early for.

You recently finished your newest album 'Close'. Your previous album is from 1986. What did you do in the mean time?
In hindsight, my previous album 'Another step' took a big bite out of my life. The reason for that is that it did rather well in Europe at first, and then a lot later in America. When you release a new album and single, you promote them in various countries. You do that with TV and radio performances. In fact I promoted 'Another step' twice: once in Europe and once in America. It took me two years to do that. After that I prepared my new record 'Close'.

Two years ago you claimed that you wanted to start writing more songs yourself. Despite this the new record contains only compositions by your brother Ricky. The only exception is is the single 'Hey mr. Heartache', which you wrote together with S. Byrd.
Ricky simply had a lot of good songs lying around. We chose them together for the album. I had a few attempts myself, and I have worked them out by now. I am very satisfied about them and I might offer them to colleagues. We'll see. I did write all the lyrics for 'Close'. I love doing that. They're my own ideas about life around me.

Your previous hit single 'Schoolgirl' was about the nuclear disaster in Chernobyl and you composed it for your sister Roxanne. Are there more songs with a message on your new album?
More or less, yeah. There's a song which I wrote with Greenpeace on my mind. It's not called 'Save the whale' or anything. It's about the bad state of the environment, which is still deteriorating. Fortunately there are now a few organisations that try to turn that around...
A song which I'm most proud of lyric-wise is about the French painter Marc Chagall. I was in art college and know a lot about painting. Recently I read a book about Marc Chagall's life. When I was flicking through it my mouth fell open, seeing all that beautiful stuff. I went to Tate Gallery (art museum in London -ed.) immediately and stood before one of his beautiful paintings for a while. Then I remembered suddenly that someone once asked me what I felt was closest to perfection. I suddenly knew the answer when I was there in the museum. I'm sad that Marc Chagall doesn't live anymore. I would have loved to play my song to him...

Do you still paint and draw a lot?
Sometimes, but not as often as I'd like.

Are you involved in the design of your sleeves, being as creative as you are?
Just by choosing photographers and selecting the photographs. But usually people don't do what you want from them....

That seems irritating!
It is, yes. But you know how it works? You make an album and at first you think there's still enough time to get involved in the sleeve design. But then suddenly a single is chosen and before you know it you're in a plane to God knows where... Then decisions are being made which you don't approve of. I try to prevent that from happening now. Because too much has gone wrong in that sense. Until recently I thought people at home would do their jobs when I was away. I was wrong...

Can you give an example of something going wrong?
There are many! I'll confine myself to the sleeve of my previous album. We started working with a creative group of people. A very freaky video had been made and during the filming some photographs were made as well. It looked beautiful, strange and wild. Then I got back from travelling abroad and one of these strange photographs were placed on the sleeve of the album. It didn't fit the atmosphere of the album at all. I went to the responsible person in a fit of anger. You know what you get to hear then? 'It's tough Kim. You either approve of this photograph or we delay the release for three months.' Well, what to do then? But although I like a good sleeve and presentation, such a failure isn't the end of the world. But in the future I will be more attentive.

Last year you were number one in America with 'You keep me hangin' on'. A real triumph, I think.
Sure. I didn't notice it really. That may sound idiotic. But I wasn't in America at that time. My advice to colleagues is: whenever you're number 1 in the US, make sure you're there! Then you can really enjoy the success.

In an interview recently you said that you were sorry that you contributed to the soundtrack of 'Running Scared'. You didn't like the movie. Why did you do it?
At that time my career in America went well and we saw it as a bit of promotion. Also there's a lot of demand for artist who want to contribute to soundtracks at the moment. It's a good development. After I saw it, I felt 'Running scared' was a monstrous movie. Fortunately the song I recorded could only be heard for a few seconds. Next time I'll be more careful before I say 'yes'.

Your career has had a lot of ups and downs. How did you experience that yourself and how do you look back on it?
It's been eight very good years, with more positive than negative experiences. I've met loads of interesting people, I've seen many countries and I've done exciting things. On the other hand there have been some lows. Periods when the press didn't write about me. Times when the public preferred to buy other artists' albums instead of mine. I have to admit, being honest, that not everything I put on record was brilliant.... Still I'm fortunate to be in a position where I get another chance. Like now, because the wind is in my sails again.

Kim Wilde (or Kim Smith, because that is her real name!) was born November 18, 1960. In a creative family. Her father Marty Wilde was a popular singer/musician and Kim's brother Ricky Wilde is now the composing and producing brain behind the records of his sister Kim.
In 1982 the super trio dad, brother and sister Wilde hit the bull's eye with their first single success: 'Kids in America'.
The song was followed by a.o. 'Cambodia', 'View from a bridge' and last year's 'You keep me hangin' on'. In her eight year career Kim Wilde released five LP's: 'Kim Wilde' (1981), 'Select' (1982), 'Catch as catch can' (1983), 'Teases & Dares' (1984) and 'Another step' (1986).
In 1987 Kim Wilde contributed to the single 'Let it be' by Ferry Aid and she released the Christmas single 'Rocking around the X-mas tree' together with comedian Mel Smith as the duo Mel & Kim.
Before she started her musical career Kim went to art college. Drawing and painting are still her favourite hobby's. She is also interested in movies. A movie role, writing a film score and developing further as a composer are her biggest future ambitions. 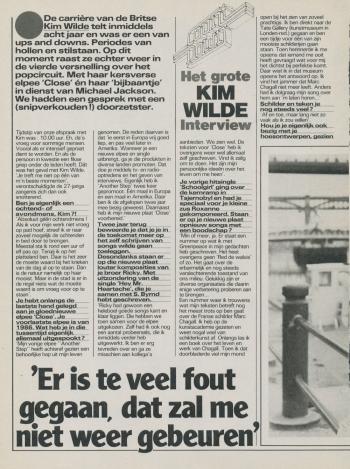 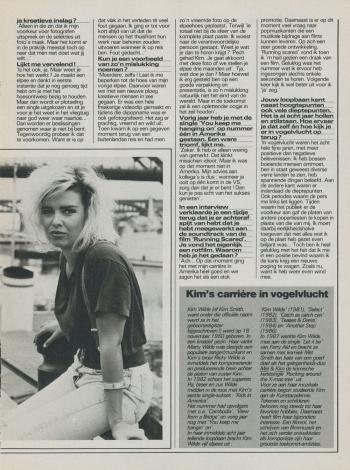