The dream that came true

It's very busy in the hall of the luxurious Sonesta Hotel. Business people walk in and out, sit in the luxurious chairs, drink coffee, do their business! Kim Wilde has also found a temporary home at the hotel. She's expecting us. An employee says to her that we are here. A few moments later the elevator takes us up, ninth floor. The door is already open. The adventure can begin!

When we come in she's sitting upright in a chair. Without make-up and with a slight cold. She doesn't look like the star who makes everyone go crazy. Kim is now just Kim. A spontaneous, friendly girl. Beautiful and lovely. She relaxes visibly, when we say that we've come to talk about her career, and that she can keep her private life to herself for this time. She sits more comfortably with her legs under her. She's ready to do it!

Kim Wilde was brought up in the music world. Her father, Marty Wilde, was a rock idol in the fifties and when Kim was born in 1961 she arrived within a family in which music had its own important place. And now it's evident how much influence that had. 'My father is still giving me advice, and together with my brother Ricky he always works on my albums', says Kim, who admits all too readily to being very proud of her family. 'My mother Joyce takes care of the business side of my career and Marty and Ricky do the musical side.'
Despite the fact that her family is close-knit, Kim lives on her own these days. 'Not that I couldn't live in our home in Hertfordshire', she laughs, 'but it seemed more sensible to start living my own life. You have to do most things alone in the music business, that's what I think. Which is why I bought a flat in North London, complete with its own studio, a drum computer and keyboards.'

Besides friendly Kim also turns out to be modest: 'Look, I never had singing lessons, so I suppose there could be some criticism of that. Maybe I'm not the best singer - sure - but I am recognisable. And that's more important, I think. Take Elvis Costello for instance. When you hear something he's recorded you know it's him. And that's what I try to do. I am an individual with my own emotions, and you should be able to tell.'
The story of Kim's discovery is wellknown. How she sang backing vocals for her brother Ricky at first and how she was discovered by Mickey Most after that. Wasn't it disappointing for Ricky that not him, but his sister became the star of the family?
'Not at all', Kim says decisively. 'A lot of people think that, but it's closer to the truth that Ricky didn't want to become a star at all. He thinks writing and producing songs is much more important.'
For her newest LP Kim has written songs herself again as well. 'It's a great way of expressing myself', she says. 'It is extremely tiring, but you can write about anything. And that's important for me. My biggest fear is waking up one day and not knowing what to do. That's why I like this profession so much. I love people and I love getting along with them.'

Before 'Hey mr. Heartache' was released it has been quiet around Kim for a while, but still she didn't disappear from public interest altogether. 'I think it's because people notice that I like them. I've got a certain radiance that isn't easily forgotten.'
Last year Kim went to America for a promotional tour. She's made it to the list of wellknown popstars over there as well. But she wasn't when she was there. 'I had to be there in the studios of countless radio stations they have there, and at the most impossible times. No-one knew who Kim Wilde was. One time I had to laugh so hard. A DJ asked me: 'How do you feel about having made your own record?' He didn't know at all that I've been working in Europe for years... But after 'You keep me hangin' on' that changed radically. I broke through in America, and I'm really proud of that I can tell you.' Kim shows us the diary she kept during that time. 'They will know who Kim Wilde is' it says on one page. And they know now.

When she'd finished her album, there was a time for Kim to wait what would happen. She knew that she would get recognition after all that hard work, but how it would come surpassed even her wildest expectations. 'When I was asked whether I wanted to support Michael Jackson, I thought I'd have a heart attack. It's a dream for most artists, isn't it? I think it's wonderful! Scared? No, why? I know the audience comes for Michael, but I've got enough selfconfidence to think that I can do it. We're very different and that's exactly why the combination of Michael and me is so interesting. He is a perfectionist - I'm not. I have to use my emotions. I don't feel bad about this. Being in one concert with Michael is just fantastic!'

When we witness a television performance after her invitation that afternoon, Kim has metamorphosed into a superstar. She walks around confidently. Michael Jackson couldn't have made a better choice... 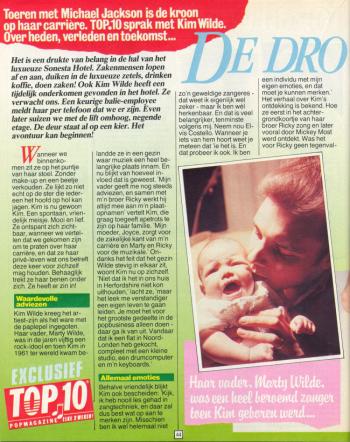 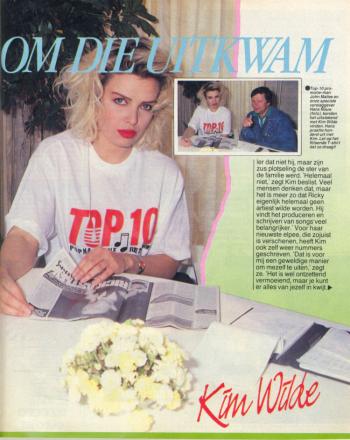 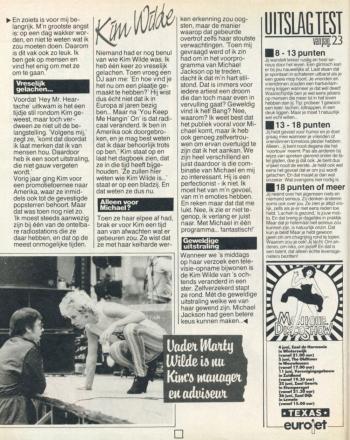