On November 18, 1960 Kim Wilde is born. Her father is Marty Wilde, teenage idol in the years '58-'62 with hits like 'Donna', 'Sea of Love' and 'Rubber Doll'. After '62 he devotes himself mostly to compoing. Amongst others for his son Ricky. When Kim replaces a backing vocalist during a revival tour the Wilde clan decides not to let Rick but Kim take on the role as potential superstar. And in 1980, it is finally happening. With her first single 'Kids in America', a hit in '81, and her debut album the shy, blonde teengager is immediately bombarded to pop idol. Now, seven years later, she is still there. With her support performances for no-one other than Michael Jackson the future still looks rosy. Will you take a look through her photo album?

1. Kim as a little girl with her favourite cat Ramses.

2. Father Marty with his family: his wife Joyce, Ricky and Kim. "I thought I was an ugly duckling"

3. During dad's tour Kim is singing backing vocals for the first time.

4. Her successful career starts with 'Kids in America'. Ricky and Marty help Kim continually with the production and writing of songs.

5. The successes follow one another: 'Chequered Love', 'View from a bridge', 'Cambodia' etc... Kim is bombarded to pop idol. Our roving reporter arranges an exclusive interview. Here he walks with Kim through Brussels.

6. Here you see Kim performing the single 'Love blonde'. Live she is doing well. In '82 she goes on her first tour. And this spring she performs in support of Michael Jackson during his sensational 'Bad' tour.

7. Here you see h with Michael Jackson, Who-guitarist Pete Townshend and Beatle Paul McCartney during the Brit Awards. Because of her sparkling personality she is very loved by her colleagues.

8. In Countdown Kim is a welcome guest. Because she liked presenter Adam Curry's t-shirt so much, she got one herself.

9. Together with English comedian Mel, Kim records a single in '87: "Rockin' around the Christmas Tree'. The proceedings go to charity. She also sang on Ferry Aid's 'Let it be', for the victims of the Zeebrugge ferry disaster.

10. 1988. With her sixth album Kim has become an adult vamp. she writes songs herself and would like to try film in the near future. 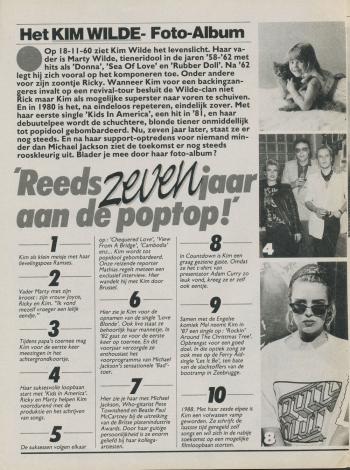 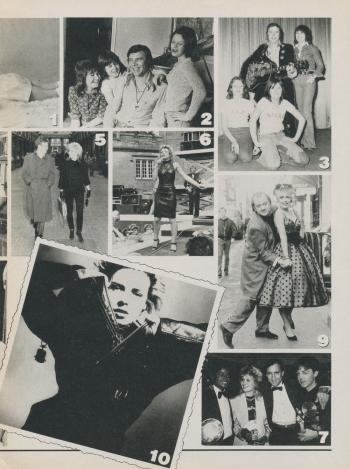