The European opening act of Michael Jackson (but not in Belgium!), a new album, the new hit single 'Hey Mr. Heartache': Kim Wilde has every reason to feel good. 'That's right', says Kim, 'but I keep my feet firmly on the ground. I have been through too many peaks and troughs, I know what it is to be at the top one minute and to be forgotten the next. It's going well now but I'm not too enchanted by it. It could all be over tomorrow. If you expect nothing, you won't be disenchanted.' 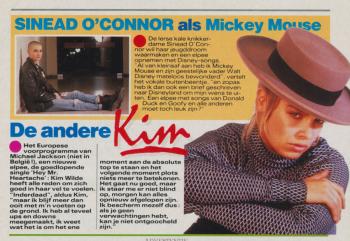