The rock in Kim Wilde

The father, Marty Wilde, known English singer of the Fifties, he began to rock pleasures. She still today scrupulously follows his advice. Primadonna new wave 80's, five albums behind, Kim relishes a second artistic youth with "Close", the new LP. "And a true reflection of my musical roots, from the Beach Boys to Joni Mitchell, up to Simon & Garfunkel."

Seven years ago, in full blast new wave, the "swinging London" of pop rampant bowed in front of Kim Wilde, whose single "Kids in America", got to number one in the charts. The blue-eyed blonde Kim, welcomed as the Brigitte Bardot of pop, is inserted into the handpiece of the emerging women alongside Blondie, Pat Benatar, Siouxsie Sioux and Go Go's. At that success others followed along the 80s: from "Cambodia" ('81) and "You Keep Me Hangin 'On" ('86) via "View From A Bridge" ('82).

Now, thanks to five albums behind her, Kim Wilde is back with the 33rpm "Close", willing to even ride in along the crest of the wave. It should also hold back the new generation, she always has the good rock to propose.
"I think 'Close' truly reflects my musical roots," says the singer, "who are the Beach Boys'" Pet Sounds ", and then Joni Mitchell and Simon & Garfunkel. Between the lines, we can find my current tastes, from Prefab Sprout to Christians. An album that is giving me a lot of satisfaction, beginning with two songs: "Hey Mr. Heartache" and "you Came." the latter is certainly among the best compositions of my career ".

A prominent career, constantly "supervised" by the father, Marty Wilde (born Reginald Smith). "In the 50s he was a real sex symbol, the English equivalent of Elvis Presley. He performed a lot of successful covers, like "Endless Sleep" and "A Teenager In Love." "I started to love rock thanks to him and constantly follow his advice. And then there's Ricky, my brother, another indispensable presence. the most valuable ally, at least in composition headquarters. "

The fact of also being the author has ever created to Kim problems?
"At the beginning it did. There has always been a tradition of English composers and the fact that I did not write my own songs did turn up a few slightly critical noses. Then the thing has changed thanks partly to the success of some of my colleagues as Sade."

A Kim Wilde ball is to reinterpret in his own way songs written by other artists; a way to demonstrate its eclecticism. "I did two years ago with" You Keep Me Hangin 'On', a successful rhythm and blues of the Supremes. I always liked that song and I thought it would fit well to my voice. Even in "Close" I wanted to include a "cover": it is "Lucky Guy" by Todd Rundgren. Todd is an extraordinary musician, one of the best American rock talents of the last twenty years. "

The fact that the international pop scene in is increasingly characterized by female presence fills Kim with satisfaction: "It's nice to be able to appreciate the talent of so many women like Tracy Chapman, Tony Childs, Suzanne Vega. It is equally positive that we replace the "old guard" after so many years.

For the vocalist from London 88 turns out to be a second artistic youth, thanks to the new album and concert. Indeed Kim Wilde made it to "support act" to Michael Jackson at his recent tour "The opportunity was great and I did not have the escape. I had a way of performing in big stadiums with thousands of people in front of me and it was positive, especially in places like Italy, where my popularity is not yet at the massive levels."

For Michael Jackson she has words of appreciation: "Some people cannot stop raging against him. I met him and I can say that he is a sweet and lovable man. His smile is the mirror of what's inside of him, there is no pretence."

For 1989 Kim will probably release a new album and tour again, with herself as the primadonna. "I wish to come back to Italy to show more of myself, musically. A goodbye and see you soon, then". 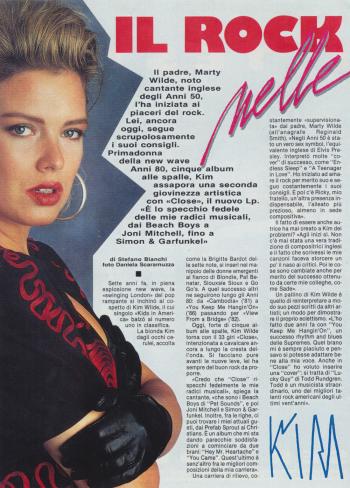 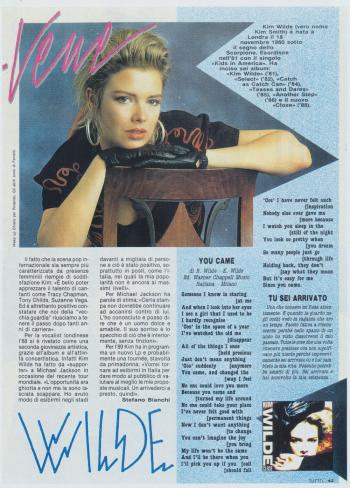