"Kids in America", sang Kim Wilde once. We asked Kim what she was like when she was a "Kid in America"? Did she think she was a beautiful girl? Did she have a lot of boyfriends? Was she happy? Did she have a good understanding with her parents? A talk about her teenage years gives the answer to all questions.

Did you like going to school, Kim?
I felt good at first. My first school was a small one where everyone knew eachanother. Very nice. It was different in highschool. That was a shock I had a hard time dealing with. It was an enormous building with long corridors and hundreds of students. Very unpersonal. I felt like I was all alone in the world with strange people around me. I often went to class against my will. On the other hand, it didn't influence my results. Not that I was one of the best, but I was pretty average. Except with maths (laughs).

Were you happy with your looks?
No, I never really liked the way I looked. I felt I was too fat and I hated my hair. I never did makeup. I just wore jeans and a t-shirt. I looked more like a boy than like a girl. Finally it was my mother who said that I could do things with makeup.

And on the inside? Were you happy?
No, I was often sad and nostalgic. I often felt bad, not for a reason, but just because I didn't feel right. I was often alone in my room with my diary, which I still have by the way. I dreamed away listening to music. Sentimental and romantic.

But everything went fine with your parents.
Well, they had certain principles yo uhad to respect, like the importance of school to have a good background later. As a teenager you think that's ridiculous of course, but anyway. In all the other things we were pretty close. We did a lot of things together, als obecause my father did lots for my career at first. Later that became a problem, by the way. I missed confidence because I was always in the shadow of my father. I finally went on a painting course, to stand on my own two feet, to get some self respect. But it was obvious that I would do something in music from the beginning, just like my dad.

Did you get an allowance?
Until I was sixteen my parents gave me a certain amount every Saturday. I don't remember how much exactly. But because I got tired of begging for money after a while, I started doing jobs to earn my own money. For instance, I was cleaning the house of my piano teacher. She gave me the lessons for free in return, so that my parents gave the money to me instead. I also sold flowers on the market and I worked in a hospital one Summer. Usually I did these things together with a girlfriend. That made work a lot more fun.

How were things with boys?
I started going out when I was sixteen. My friends came to get me and brought me home in time. I had to be home at 1 am back then. Many friends, but I wasn't flirting a lot yet. I still don't do that a lot (laughs). Where I got boyfriends? Not in school, because I was in an all girls school. They were usually friends of my brother who became my friends. 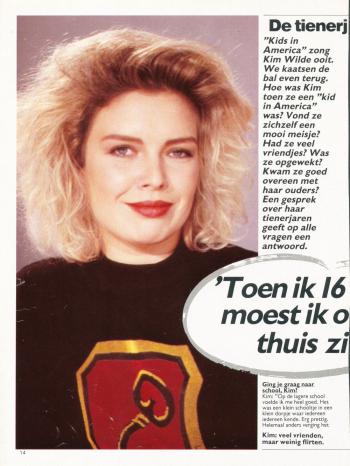