She is beautiful and talented and she returned this summer with a hit that has conquered all of Europe, 'You Came'. She was also subjected to our funny game, the Top.

French food?
I like traditional food, cassoulet, duck breast with a sauce so rich, champagne served in crystal flutes, strawberry pies ... But not too sophisticated dishes with sauces or strange new kitchen that is only the decoration, I like the food choices. For me, the French food is good for lunch but for dinner I prefer Asian food.

Taxes?
I pay a lot! Luckily the rate went down in our country but I really feel that they have paid my part and I'd love to be relieved now.

The Eurotunnel?
The large hole (laughter)? I am pleased that we have the opportunity to be closer soon. I love France and, thanks to the Channel Tunnel, the English could acquire a bit of joie de vivre of the French, perhaps they could then work to live, not live to work.

Horror movies?
I like some movies but I prefer more sensitive, romantic. Among my favorite films there 'Falling in Love "with Meryl Streep and Robert De Niro and 'Subway' for Christopher Lambert. He's fantastic and all his supporting roles are excellent.

Fast cars?
I hate fast cars and the people who drive fast, it's dangerous and it kills too many people.

The telephone?
I love the phone, it allows me to call my friends, is one of the best inventions that may exist. But I'm not an addict of the telephone, I can do without. Mine is an old post of bakelite 40 years, converted.

Marriage?
It depends who it is. If this is the wedding of a close friend, it's great, if mine is even better but this is still not in my plans!

Drugs?
It was never part of my life and it never will be. It has no interest.

Astrology?
I read it for myself to relax in women's magazines or in the newspaper business, sometimes there are just enough points on his character. Once I was reading the lines of the hand and we just discovered things about my personality.

Disarmament?
I think it's a fantasy, I do not think we will one day be a world without weapons.

Disks of charity?
That helps, it helps raise money for some people who need them. I participated in several recordings of this kind, including heroin and cons another this winter for an unbeatable combination against famine.

Miniskirts?
I wish I had the legs needed to wear them but mine are not perfect enough to fit me well. The miniskirts can be great for some girls and terrible for others, I'm in between (laughs).

New technologies in music?
They could not stop progress and I will not fight against.

The Afghanistan?
Next question ...

Spiders?
They scare me a bit still, especially large, but I do not kill them. Once I crushed one and then I felt so guilty for having done so ...

The Supremes (Diana Ross's group in the 60 years that Kim has taken the hit 'You keep me hangin' on ')?
There is a whole story about the Supremes, how they grew up together, how Diana became the favorite of their producer, Berry Gordy, how the group was destroyed ... It's terrible, but it's exciting. I read the autobiography of Mary Wilson, who belonged to the group, she is fierce to Diana Ross. I am interested in more fabulous success of their authors and many others at that time, Eddie Holland and Lamont Dozier, Dozier has also sent a telegram of congratulations to Ricky and me in our adaptation. So when Diana Ross stated that he did not like it, it left us neither hot nor cold.

Board games?
I loved Monopoly when I was small but ... I do not play anymore.

Tennis?
My back is pretty average, I have the bad habit of missing the ball often enough, I'm pretty mediocre tennis. 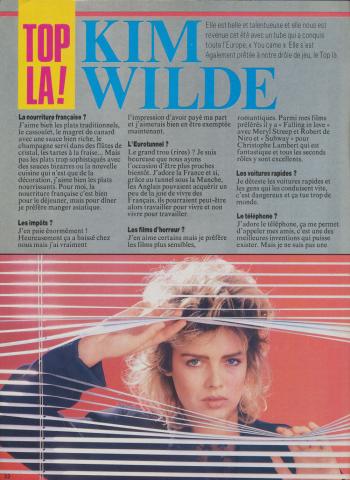 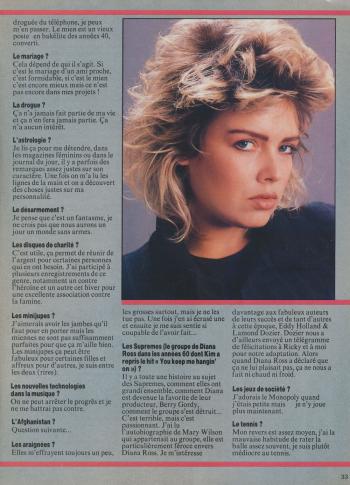