When Kim Wilde strides into a Manhattan restaurant, heads turn, conversations stop mid-sentence and usually snooty waiters hover. Clad in a plunging,skintight black pant-suit, the 28-year-old British pop star looks like a cross between Brigitte Bardot and Deborah Harry: all cool and curves. Known to American audiences for the 1982 smash hit "Kids in America"
and last year's Number One remake of the Supremes classic, "You Keep Me Hangin' On" Wilde looks to do as well with her latest LP, Close. The album's first single, "You Came," has already topped the charts worldwide, with "Hey Mr Heartache" and "Never trust A Stranger" fast on its trial.

So it must feel great,being such a success story right? "Actually, I felt like a worthless thing for a long time," she says,a pout on her red-slicked lips.While three men at a nearby table shamelessly ogle the red-hot singer, Wilde explains that throughout most of her career,people thought she was nothing more than a puppet. Her father, Fifties teen idol Marty Wilde, and her brother Ricki wrote and produced all of her material and mother Joyce managed her. "I had to deal with the guilt of getting all the credit," she explains. "That guilt was a strong motivation for me to start writing songs."
So a few years back, she moved out of the family digs and into her own London flat with the dual purpose of becoming a songwriter and loosening family ties.As she puts it, "It was so family oriented that it was beginning to smother me, so I had to, like, run away." It worked. While her mother still manages her, Wilde wrote most of the songs on Close and some of the music as well. "I had to show[everybody] they were wrong," she says, catching the double takeof the suit in the next booth. "And it's such a nice feeling, it's like SCREW YOU!"

Now that her career is back in cruise control, Wilde's next project is to put her personal life in order. Officially unengaged but attached ("I won't tell you who; he's in the business and he's very talented"), she's just bought a country house near her family in Chiswick. "Now I think I've grown up just enough to go back, but on my own terms. I'm moving into a converted barn, and I'm going to write and paint and grow vegetables and be happy," she says dreamily. "I'm just going to lead an idyllic lifestyle." But, of course. 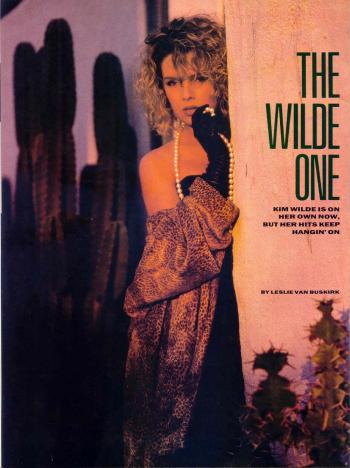