This BAD year was the best of all for KIm

Kim Wilde's face was glowing with excitement and happiness, with good reason. With two million record sales to her credit in 1988, the most successful year of her eight-year career, her popularity is enormous. Adding to the exhiliration, there is an important man in her life, Calvin Hayes of Johnny Hates Jazz.

The Hayes and Wilde families have known each other since the '50s, when Calvin's father, Mickie Most (real name Hayes) was singing with the Most Brothers, and supported Kim's father Marty on a rock tour. Since then Mickie has become a major record company boss, and it was he who launched Kim with her first disc, Kids in America.

"I didn't actually meet Calvin 'til recently", says Kim who can be seen in the Cannon and Ball Show (tonight, ITV 5.15pm). "He is very special to me, but I believe in discretion about my private life, and I won't go into detail."

Kim and Calvin are not living together. She lives alone in a flat in North West London. And there's no talk of engagement rings.

"My father insisted on a formal engagement when he fell in love with my mum, Joyce, back in the late '50s, when she was with the Vernon Girls. But I'm not that conventional. And I wouldn't ever give up my work if I got married. At the moment I love the pop world and I'd hate to lose what I've built up... hate to be in a position where there was no demand for me to make records. It would break heart if I faded without trace... though I don't think that will happen."

There's no fear of that for Kim this year as she maintains her high profile with TV appearances in Christmas Day's The Great British Pop Machine (ITV, 12.15pm) and Cilla's Goodbye '88 New Year's Eve Show (ITV 11 pm).

Though Kim sees Calvin often, inevitably her full work schedule pushes romance into the background. Apart from having had four hits this year, including her current Four Letter Word, the highlight of Kim's year, she says, was supporting Michael Jackson on his BAD tour.

"We did 35 concerts, I actually met him only once, briefly. He spent more time with my younger sister and brother (Roxanne, nine and Marty Jnr., seven). "He feels at ease with children."

While Jackson was obviously wary of forming a friendship with beautiful 28-year-old Kim, professionally the tour did her enormous good.

For the first time record buyers in Japan, France and Italy became interested in her. Those concerts with the reclusive Jackson increased her following in the USA and Germany too.

"My biggest thrill is having success as a composer as well as a singer. I wrote the lyrics of my biggest hit this year, You Came (my brother Ricki wrote the music). This increased my selfconfidence enormously," says Kim. "The composing side of the music business really motivates me. Before I start touring again, for the first part of '89 I'll concentrate on writing material for my spring album. I'll lock myself away in a house attached to our Hertfordshire studio - we call it the Little House on the Prairie - and get on with it. After so long away from the studio I've forgotten how to work all the technical gadgets. I'll have to start learning all over again." 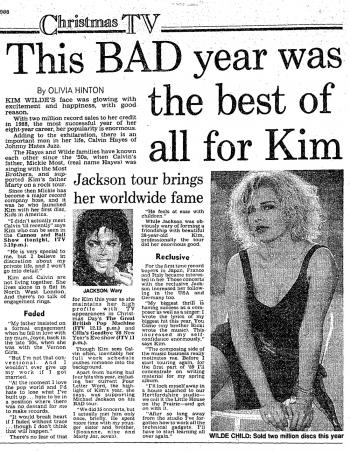