For weeks she toured through Europe as support act of Michael Jackson, but the shy superstar rarely showed her his face. Only in London he gave Kim Wilde (27) a short meeting, which lasted for just five minutes. Kim: "He is even more shy than I believed." Shortly after the star meeting there was some annoyance. Kim wasn't allowed to play before Michael anymore. Reason: the show was too weak. Kim couldn't capture the audience. Kim about the affair: "It's incredible. I'm higher in the charts than Michael is with 'You came'." Taylor Dayne (latest hit: 'I'll always love you') has taken Kim's place. The disappointed Kim is now planning a European tour of her own. 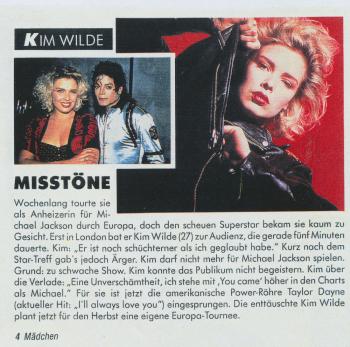