What Kim did next

In eight years, Kim Wilde has slowly transformed from the flashy teen pop of 'Kids in America' to... well, what? John Aizlewood wonders.

Kim Wilde is a survivor. 1981, the year of her chartdebut 'Kids in America', was the year of Joe Dolce, Adam And The Ants, Soft Cell, Bucks Fizz, Haircut 100, Aneka, and The Specials. They're all long gone but Kim remains.
Yet for all that, Kim has never been quite accepted as a real talent. Perhaps it's because of dad Marty and brother Ricky who between them wrote and produced all her early work and still do much more than provide a shoulder to cry on. Or perhaps it's the string of naff singles like 'Love Blonde' , 'Chequered Love' and others; dodgy duets with Mel Smith (albeit for charity) and Junior, or that desecration of The Supremes' 'You Keep Me Hanging On'.
Sometimes Kim's career seems like a succession of last shots.
"My attitude bas never been: here's my last shot," she retorts. "I did a duet with Junior because I had a bloody good song and it was a good idea to do it with him. I did the Mel and Kim single because it was for Comic Relief and made an awful lot of money for people who needed it. I don't do things for last shots, that's not my style."
Like all British institutions...
"I'm not an institution, I'm a musician. Alright, so everybody does know me, but I'm not an institution."
...Kim is secure enough to take the odd flop single.
"Of course I get worned. No one likes a flop single, but I can shrug it off. I've got to the stage where I take good things and bad things in very much the same way. Naturally if I get to number one it's a better feeling than going to 100, but I'm philosophical about it and I never feel like glvmg up."
What Kim Wilde really wants is respect.
"I'd like my due respect, but it's something you earn rather than demand. I don't care if some tatty journalist who doesn't like what I do has no respect for me, because I have respect for myself. I haven't sold out and started Kim Wilde Lingerie or Kim Wilde Perfumes or done adverts, though I might change my mind if I get a lucrative offer from Mitsubishi!"
This search for respect leads to the new album, which in the record company's eyes should turn Kim Wilde into a mature intelligent artist. It does have a few more than useful tracks, especially 'Never Trust A Stranger'. Kim wrote some lyrics and some music with her dad and brother.
"Wespent three months recording it, rather than spreading it out over a year as we used to do. That's why it sounds like an album and not a coUection of songs. I had to get more involved in the music, because although I reaDy enjoyed being a pop star it was never really enough for me. I enjoyed being lusted after by young boys, but spending half a year miming to records and doing interviews about what colour your socks are is very tedious."
Despite 'You Keep Me Hanging On' going to number one in the USA, America hasn't loomed large.
"Not at alf. Anyone who heard the album would see that, I don't know enough about American radio to be so contrived and neither does Ricky."
Kim bas moved into politics with the excellent 'Stone' which takes on environmental issues.
"If people think I'm bandwagon jumping that's their opinion. All I can say is that it was really from the heart. Being a member of Greenpeace, I'm very concemed about the wool being pulled over people's eyes as regards pollution. It's the kind of thing my generation are very concerned about."
Although Kim played a major part in her LP, she hasn't been so involved in the image change, from pop puppet to album artiste.
"It's not something that I was aware of happening. It wasn't my idea and I didn't realise things were different. When the record company said 'We're going to try this new ploy', I couldn't comprehend why they would be doing it. All I wanted to do was make a good record."
The rest, and of course the respect, is up to you. 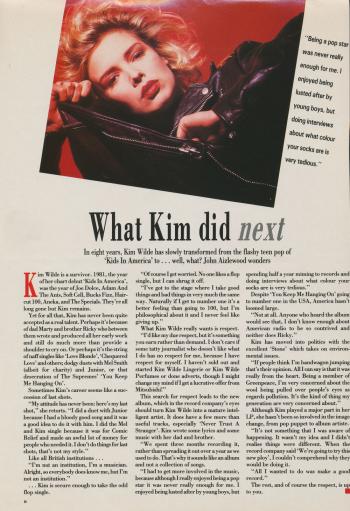