What thunder hit she got... Kim Wilde now she's bigger than ever

If she is to thank Michael Jackson, her father and brother or her own talent, we do not have a clue, but in fact, Kim's summer tour has once again grown into a giant. Now the single "You Came" is on the chart - and the blonde beauty itself is offered the leading role in "Evita"! ....

Yes you - you read it right. Kim Wilde is really on the lead in the filmization of the "Evita" musical, and although nothing is yet clear and the contracts are still waiting for signing ceremony, she learns to be good at the girlfriend. Earlier this fall, Kim was secretly invited to the United States to meet director Oliver Stone and she exuded both joy and enthusiasm before the departure.

"It's a great chance for me," she said. "If I get the role, I'll bet all that I take - and I'll start taking theatre classes!"

As you may remember, Madonna was supposed to play Evita at the cinema at the beginning, but when the glamor queen was coy as she asked $50 million in advance, Mr. Stone pulled her ears. He could not even afford such a big animal as Madonna, and that was the case. Stone continued to look among all the harsh nuts, he filmed some, discussed with others and finally found Kim Wilde!

That is, maybe. Actually, we do not know if Kim had been missing out on the film company in the United States, but did she make sure she put all other commitments in the first half of 1989 because that's when "Evita" is to be recorded.
Otherwise, she learns to be full yet. After the tour with Michael Jackson, it's a pretty good thing for Kim Wilde, the lp'n "Close" has sold excellently and the single "You Came" became a hit of such mean that she hardly ever saw the breakthrough since the breakthrough of a gentleman's masses years ago with "Kids in America", even then.
"It feels good," said Kim, feeling extremely well. "And "You Came" is probably the best and most mature song I've ever done - it's a great experience to finally, after all these years, to be taken seriously!"

The tour with Michael (the surname is Jackson, you remember that) was also a very positive experience. "He is so insanely good, that guy, professional all the way out of the fingertips. And he is not as weird as some also claim. He has a warm and winning smile and he is very polite and nice. Some newspapers have claimed that he avoided me during the tour, but that is not true at all. I have met him several times - and I hope that we will see you from time to time in the future too. He is a good mate."

Of course, her performances as a support act have come to a halt when the big little man herself endured the scene but she has still been there and we all have a easy reminder of her many nice little hits she has delivered over the years and what talented songwriters brother Rickie and daddy Marty are.

"In the future", says Kim, "I will probably write more myself. I feel ripe for it now, to take over a larger piece of material and process. This year is important to me, if I can act as a star and artist."

On the private level, she is still lonely alone and without boyfriend, although the candidates have been many and than the other named "Kim's new man". Last, it was Rick Astley who would have fallen for the blonde manes and the revelation a la Monroe, but, according to Kim, this was a completely fake story without any authenticity.

"Rick is a good friend", she says, "nothing else. The same thing with Calvin Hayes from Johnny Hates Jazz - we have worked together on some occasions, and a few years ago, it actually happened that we were enjoying ourselves together, so it felt a little strange that the newspapers printed such a story only now. It's not wise what people can find at sometimes. I do not do it. They may write what they want - though it would be nice if they could concentrate more on what I do as an artist and singer and ignore the other things..." 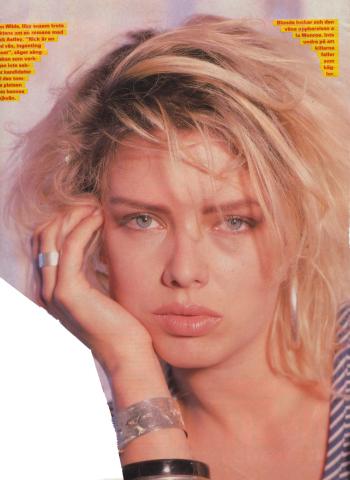 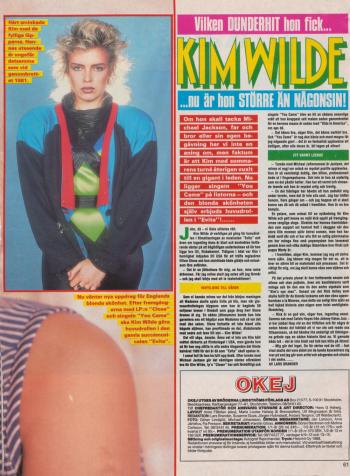