She was only 20 when she scored a big hit with 'Kids in America'. Sure, she was helped by father Marty and brother Ricky, two old hands in the pop world. Now at 27 Kim Wilde is still one of England's most alluring singers. So it's time to go down memory lane with Kim. Read on...

I have always been a fairly shy child. At home I did have a big mouth. I always wrapped my brother Ricky and my parents around my finger. My father could be charmed with an innocent smile. I always got my way. But in school and when I was out with my parents, I was really shy.
Everyone thought that I was a very quiet and closed off girl. When I began to feel at home somewhere, that changed. The first time on stage I didn't know what to do with myself, too. I wanted the ground to swallow me up. When I see videos from that time I'm always ashamed. It seemed like I was nailed to the ground. That isn't a problem anymore now.
Other characteristics? I am very honest and I love having fun. I am very neat and patient.

I started experimenting with make-up at fourteen. My mother told me how to take care of my skin. I learned it the right way. Not like my friends who started with all kinds of colours and creams. At some point I started dyeing my hair. In fact it started off as a joke. When all my friends saw that I actually looked better with blonde hair I started getting convinced. It took some time for my parents to conclude the same!

It may seem ridiculous now, but I've always been embarrassed by my large feet. As a child I had a bigger size than other children my age. I was often teased about it. Especially my brother was really good at that. Now I am still stuck with these large feet and I still think everyone looks at them. Strange, but I can't help it.

When I was 18 I went through France in a car with two friends. We were away for two weeks, but those were fantastic weeks. In fact we were sweet girls, but we felt very free. Other great memories are the births of my younger sister Roxanne (7) and my brother Marty (5).

On primary school I had a bunch of really great friends. We laughed a lot together. I wasn't very studious. In highschool I was bored a bit, to be honest. Fortunately my parents noticed this and I was admitted to art college. I wanted to do something creative and I could do it there.

My friends have always been jealous of the great bond I've had with my parents. Because my father was a pop idol, music was something I grew up with. My parents knew more about the latest records than I did! Mum and dad were very happy when I wanted to become a singer. But they would have gone along with any other choice, obviously, as well. I tried to do it on my own. My father and brother wrote the songs and produced them, but I did everything else my way.

You won't believe it but I was madly in love when I was 9. My big love was called Neil and I can still vaguely remember him. No, not a lot happened. When he kissed me my cheeks coloured so red that I didn't dare look at him anymore. My mum says we were a great coupe. Neil is now 28 and married.

When I was 13 I thought I was ugly. I was always on a diet, because I felt I was incredibly fat. On top of that I had pimples and I felt I was way too tall. I was 1m70 then and was taller than all my friends. I probably had my adult length already because I didn't grow since then. Now I think I'm rather small in fact. 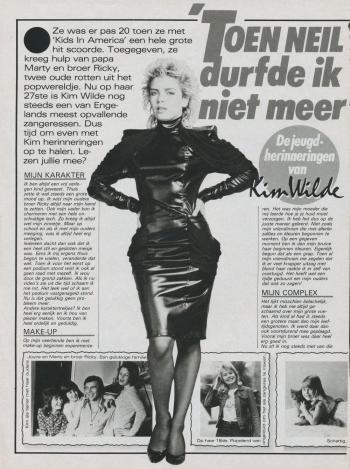