Why I didn't want to be daddy's girl

Already, at 28, Kim Wilde is a woman with a colourful past. As well as the fame that comes from being the daughter of an original rock 'n' roller, she's gained a reputation as an artiste in her own right. And, as Judith Simons finds out, that makes it easier to accept being Marty's little girl.

It's taken Kim Wilde eight years to realise what she should have known all along: that she's a big talent in her own right, not just a beautiful blonde puppet, a mouthpiece for songs composed and produced by her famous father, Marty, and her brother, Ricki. The enthusiastic crowds, screaming for Kim when she supported Michael Jackson on tour, were proof of her strong stage presence. Her latest hit singles, Never Trust a Stranger and You Came, have put the seal on her self-esteem, because she wrote the lyrics of those songs, and most for those on her hit album Close, although her latest single, Four Letter Word was written by Marty and Ricki. When I caught up with Kim at her North London flat, between her trips to the US and Japan, she was exhilarated by her success and had the confidence to confess to her earlier self-doubts.

'I was always aware that, without a good team behind me, I might never have had hit records. Hits are a team effort, and the singer is not the most important person. Certain sections of the press we re cynical because I worked with my family. I found this attitude so destructive I was actually ashamed of my situation. It's only since I started co-writing with my brother, Ricki, and sometimes with my father, that rve begun to feel good about it... to respect myself and value my own contrihution.

'I used to stifle my pride in my family. Now I come out and say it: yes, we're a strong team, working together because we enjoy it, not because we have to,' says Kim, who wi11 be a guest on Gilbert's Fridge on Thursday. The Wilde family, two generations of hit-makers, are unique in the British pop world. The dynasty was founded when, at the age of 20, Marty, popidol of the late Fifties / early Sixties, married teenage Joyce Baker, a singer with Liverpool's Vernon Girls. Kim, who recently tumed 28, was bom the following year, and the next year Ricki came along. Since then the Wildes have had two more children: Roxanne, nine, and Marty, seven. Ricki also married young. He and his wife, Mandy, have a two-year-old son, also called Marty, and are expecting another baby.
Marty Senior and Joyce have founded a large music complex in Hertfordshire, run by ]oyce. While Kim was growing up, the family was less prosperous than now, but Marty's was still an impressive name in pop music. 'I was very aware of my dad,' says Kim. 'I had a vision of doing something sirnilar. The urge to do well in pop was always there. But as a young teenager, I was introverted.

'Ricki started early. He left school at 15 and played keyboards in Dad's band. I also wanted to work with Dad, but at the time I was doing A-levels. At last, during a school holiday, Dad agreed to let me go on the road, joining Mum as one of his back-up singers. At the end of it, I went off to art college, where my self-confidence grew.'

When her father and brother wrote and produced Kids in America for Kim, record company boss Mickie Most wanted to launch her as a pop singer. 'Stepping into the limelight was my own choice. I wasn't forced,' says Kim. 'But, though I was already 20, I still wasn't brimful of confidence, and I hoped people wouldn't find out I was Marty Wilde's daughter. Even when Kids in America was a hit I was sceptical about my own part in the operation. It's been a long and painfu1 process, to become more mature and take my share of the credit.
'When I was offered the Michael Jackson tour I had trepidations, wondering if I'd sink or survive. But it turned out tenibly well for me and I'm grateful to Michael for the break.

'I met him only once, briefly: found him cute and friendly, but shy. He's in another world and I'm not sure where that is. I wouldn't pass judgment.' Evidence of Kim's modesty is seen in her flat. Unlike many stars she does not have a single picture of herself on display. Her pictures are of screen legends: Marilyn Monroe, Greta Garbo and Tallulah Bankhead. The paintings are by her art college friends. Her bedroom, which she decorated herself, is very 'arty': dark blue walls and ceilings, black wardrobe and gold-painted door, matching her brass bedstead. It's definitely a bachelor-girl pad. 'My brother Ricki and I may work together, but we lead very different private lives. When Ricki bas free time all he wants is to stay home with bis wife and little boy, but I go to parties and social things, enjoying the single lifestyle. I love kids, and the little ones in our family bring enormous pleasure, but I realise they're a huge responsibility. I won't have children until the time is right.'
Of course, Kim thinks a lot about love. She insists the song You Came was inspired by Ricki's little boy. Could her lyrics also describe her feelings about her romance with Calvin Hayes, of the group Johnny Hates Jazz?
'Let's say that right now I'm very happy. Happier than I've ever been. Calvin is very special to me. But I won't go into detail about our relationship. I believe in being discreet.'

While Kim's father, Marty , has claimed that Kim has thoughts of quitting showbusiness because of Calvin. Kim denies this. Calvin is the son of Mickie Most, head of Kim's former record company. Kim and Calvin had been seeing each other for some months before Calvin revealed their secret romance. Kim herself bas always been too jealous of her privacy to lay bare her feelings on love - except, of course, in song.

'But I don't think my lyrics are necessarily autobiographical,' she says. 'In the future, I'll be doing a lot more writing. It's a very positive and creative side of my job. Films are another possibility, but at present I don't fancy taking six months off from my music career and having to get up at 5.00am to be on the set.

'I do have sleepless nights thinking about being 40 or 50. Goodness knows what I'll be doing then. I can't visualise myself at that age being a glamorous, jet-setting pop star. On the other hand, I wouldn't like to be planting petunias.

'Likewise. I don't see myself going into the business side of things, like Mum did. She runs our five business companies, and she's very keen for me to be more aware of the financial aspects, but they don't motivate me at all. 'Mum's altogether different from me. Having grown up in Liverpool without much money around, she's much more thrifty than I am.

'She still feels guilty about spending money on herself.' Mother and daughter have very different hopes, too, for Roxanne. Joyce visualises her nine-year-old daughter following her own footsteps, marrying and having children young. 'But I don't see her like that at all.' says Kim. '1 was the one who chose her name, Roxanne, and I see her as a big star. But it may not turn out that way.

'She likes horses. Still, she and my little brother, Marty, have started writing and taping songs, so perhaps she will go in that direction. I could end up as her manager!' 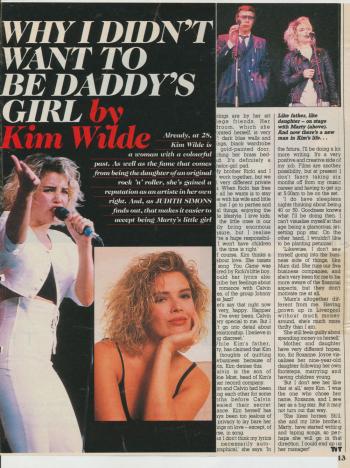