After weeks of playing second fiddle on the Michael Jackson tour, Km Wilde finally gets to meet her hero. Today's exclusive picture was taken backstage at Mannheim, West Germany, on the last date before the Jackson circus hit Britain.
"He is very cute", she said afterwards, obviously overawed. Then, modestly: "It never crossed my mind though that we could become friends as he is very shy."
Kim had one consolation after the weeks of will-he, won't-he speculation on the meeting. Michael Jackson definitely knew who she was. Unlike Prince Charles, whom she met backstage.

Kim says: "Princess Diana said she'd like me to meet her husband. The Prince looked perplexed, then asked me if I was 'something to do with pop music'. He hadn't seen me on stage - that's his loss! - and it was clear he had really come only to see Michael Jackson. He is very charming, though, and I do realise that pop music isn't really his scene."
Since meeting Kim, reclusive Jackson has come out of his shell a little. On Tuesday night in London he took his little pal Jimmy Safechuck to see Andrew Lloyd Webber's Starlight Express. 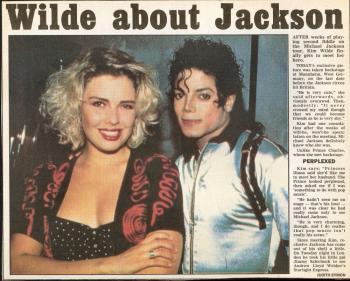