Raunchy rocker Kim Wilde has seen her career soar over the past year, thanks to "a kick up the backside" from Michael Jackson. Fortunately for kim, who accompanied Jacko as the support act on his world tour, the kick was merely verbal.

"In the past people have said I wasn't ambitious enough", she says. "And I knew it was true. But touring with Michael really inspired me to push myself and push my standards. It was great to have my name associated with his, but I still had to earn respect from people. I had to go out and work in those concerts. I have come to terms with myself a lot over the last year, physically and mentally. I've never been more positive about things. People say I look better and that I seem happier. It's made me want to go out on tour again next year to see if what I have to offer, my voice, my image, is enough."

Kim's enthusiasm will come as a surprise to those who believed newspaper rumours that she had fallen madly in love with Calvin Hayes, son of her former record company boss Mickie Most, and was quitting showbiz.

"It's not in my character to discuss my love life", says 28-year-old Kim. "All I'll say is there's no smoke without fire! I kept in touch with Calvin all the time I was on tour, yes. But then I keep in touch with everyone. I don't neglect people just because I'm away."

Though Kim, daughter of Fifties rock idol Marty Wilde, claims recent reports on her love life are pure invention, there is one "quote" that she agrees with, that marriage frightens her to death.

"I would say that", she laughs. "I really would! I grew up during a time when people like Britt Ekland and Rod Stewart claimed undying love only to split up months later. I don't want to drag my relationship out in public. While I was in Japan on a promotional tour recently the Givens versus Tyson battle was raging, and it was media frenzy. I felt really sorry for the two of them. They were like red meat in shark-infested water, just being torn apart. I'd never want that to happen."

Views get a chance to see the new-look Kim tomorrow night whe nshe performs Live From The Palladium, a stage she first sang on 11 years ago as a backing singer to her father. Then the following Sunday she is back on TV in Best Of British, a showcase for the nation's top music talent.

"They asked me where I wanted to perform and I thought of the most public place possible", says Kim. "I wanted to rub shoulders with lots of people, mix with my public. I have fun with them and I like to be close to them. We took  the cameras round the streets and I was followed by this whole class full of children singing You Came. It was great because usually you're in a very controlled studio atmosphere. I prefer that spontaneity. You do get one or two making rude comments, but it's nothing too disgusting." 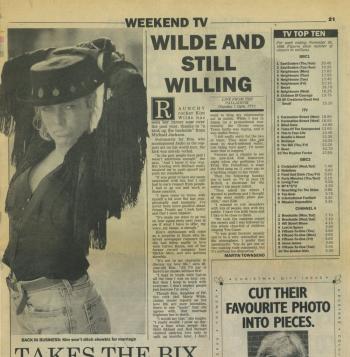