What's it like to be the only woman who can say she's performed with Michael Jackson every night for months? There's only one person who'd know and that's Kimmy Wilde who's been supporting Jacko for every single one of his European concerts. Life on the road with the pirhouetting, sequinned wonder has been so hectic that Kim's hardly had time to wash her underwear. Follow Kimmy as she talks Andrew Panos through one typical week of the tour.

Monday July 4
Just finished the 15th gig of the tour with Michael in Cologne, West Germany. It was a great gig, the audience were really enthusiastic. I had a last minute call to fly back to London to appear on Wogan and Top of the pops so off I went. The tour bus drove off at the airport with all my stage clothes in it and we had to frantically call it back by radio telephone just before I was due to fly off.

Tuesday July 5
Doing Top of the Pops was nice because I met The Communards down there, I really like them, I knew their drummer June really well, from the days when she used to be in a band called the The Modettes. It was nice seeing her again too. She told me she was going to have a baby. The producers asked me on the spot to present Glenn Medeiros with a birthday cake because he was 18 years old. It was a bit embarrassing but he turned out to be very sweet and I was really impressed with his voice because he sang live although I don't like the song.
After doing TOTP and Wogan I felt really tired so I went back to my flat (in north London) and my best friend Claire came round for a drink. She was just getting ready to go off on holiday to Greece and I was really jealous.

Wednesday July 6
In the morning I had to go to my record company MCA and do lots of phone interviews with Australian journalists. Most of the questions were about Michael... 'is it true he's been buying you lots of flowers!' and 'has he really fallen in love with you?'... silly questions like that!
I think a lot of people have just been using me to get to Michael anyway, although at the same time being on tour with him has been great for me and given me a lot of public exposure.

Thursday July 7
A whole day oFf! I couldn't believe it! It was the first complete dsy off I've had since the tour started. I decided to do all my laundry and clean up the Flat. I'm not that good at tidying up though. I have a woman who comes in once a week to clean but 1 don't like anyone doing my washing for me because 1 have a lot oF clothes that could be ruined if they're not handled properly. And anyway I don't think it's right to ask someone else to wash your underwear for you is it?
I checked all the bills were paid as well because there was quite a pile when I got back. I do tend to let them pile up. I nearly got my telephone cut off a few weeks ago but my mum went round while I was away and paid it for me. I don't actually spend a lot of time on my own in the flat. When I'm there, which isn't very often, I prefer to have friends round for a chat and a drink rather than just sit and watch TV. Ideally I wouldn't like to live on my own, I'd prefer the company of friend but the thing is I'm a bit fussy and I need a lot of space. I've also got a tendency to walk around the flat completely naked and I don't think I'd be able to do that if I shared with other people!
Anyway... after I'd done all my washing I had to catch a flight back to Munich that night for the concert the next day.

Friday July 8
(A very big night...)
The concert tonight was wonderful. It was in the Olympic Games Stadium and it's a beautiful stadium. Tonight was special because after my set one of Michael's men asked me if I'd like to go into Michael dressing room and meet him. I was excited because it was the first time we'd met since the tour started.
Well, we didn't exactly engage in deep and meaningful conversation because it was only five minutes before he waent on stage but I still thought he was sweet. He had a lovely smile and when he put his arm around me he was ever so gentle and he said... 'hello Kim it's very nice to meet you' and I said the same and thanked him for giving me the opportunity to be on tour with him and that was about it. But I've got nothing but good things to say about Michael. People, especially journalists, don't believe you when you say he's a really sweet guy. They want to hear what a loony he is but I don't think he's a loony at all. Anyway, after we'd met I went off to the side of the stage with his manager Frank and we watched the show from there. He was absolutely brilliant.
Every night there's a different vibe when Michael does his act and the audience that night were incredible. One of Michael's musicians started playing 'Hey mister Heartache' in the middle of his solo which was quite funny.
Usually after my show I unwind with a glass of wine and a chat with my band or else I go back to the hotel with Michael's band and a few drinks and then it's off to bed. I don't lead a sex and drugs and rock 'n' roll lifestyle I'm afraid. I find all that stuff stupid.

Saturday July 9
Most of today was spent travelling to the next and final gig of the German tour, in Hochenheim. So I spent all day on the tour bus watching videos and reading. I'm reading a book on Biko at the moment.
When we arrived at the site of the gig, about late afternoon, I decided to do a bit of topless sunbathing and suddenly there were all these men trying to get into our little enclosure and there was a helicopter circling above us and I was convinced it was someone from The Sun so I decided to cover up.
That night was a great concert. The best of the German tour. Then we travelled back to London on the tour bus. I tried to get some sleep on a bunk bed in the bus. I went to get into th ebed but it was pitch dark and I couldn't see what I was doing and accidentally got into my guitarist's bunk. We both spent some time making our apologies.
We arrived at Ostend and had a long ferry ride to Dover. Going through customs I had a long baggage search from the officials which was very annoying. I don't know what they expected to find, I haven't exactly got a crazy rock 'n' roll and drugs image have I?

Sunday July 10
Another well-earned day off. I treated myself to a curry for lunch and my friend came round later and we had a good old chat. I told her some gossip about the tour (which I'm not telling you!) and she told me some gossip about mutual friends we have. And that was about it for Sunday. I was so knackered I decided to have an early night. A bit boring but quite an eventful week nevertheless, don't you think? 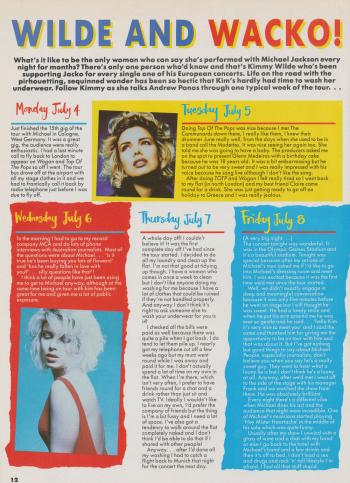 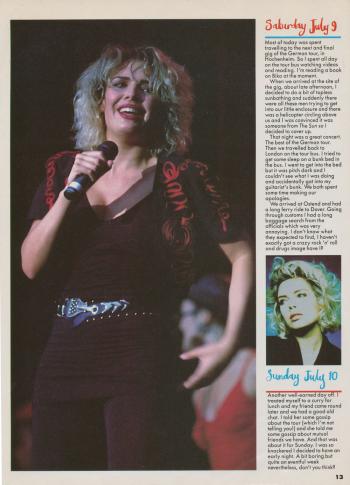