July 1976. Knebworth, Herts., England.
After hitching down through the country, yours truly is one of the 200,000 fans descending on a field to watch The Rolling Stones in concert. Nearby, at the same time, a young Kim Wilde is enjoying her first real romance which is blossing in the Hertfordshire sun.

July 1988. Knebworth, Herts., England
We're back in Knebworth but this time I've just stepped off a Ryanair flight and I'm sitting in the hospitality room of a recording studio surrounded by wall-to-wall gold discs for worldwide record sales of one artist, Kim Wilde. A door opens and the strawberry blonde singer breeze in wearing a low-cut top, a black mini-skirt and a wide grin. Things are going well for Kim right now - her latest album 'Close' has been charting well throughout Europe. 'You Came', the second single taken from it, entered the British charts at No. 38 and then, of course, there's the Michael Jackson tour.

'Yes, that's been really great. I was thrilled when we were asked to do it'. But she's not giving away any inside stories about the gloved one! 'Actually, I only got to meet jim quite recently, when we got to Munich, after weeks on the road. He was just about to go onstage at the time so we didn't get to do much talking. But I was glad to have the opportunity to thank him for allowing me to do the tour.'

In the press, Kim is often portrayed as just another sexy, pouting prima donna manipulated by others. Her response to her critics is candid. 'I've never been averse to exploiting my sexuality to the fullest', she admits. 'But it's not something that I take seriously and so I don't waste time thinking about it.' The whole subject seems tedious to her and she'd rather be discussing her developing skills as a songwriter and producer. But first let's stop, rewind a bit and look back into the mists of time.

The Wilde story actually begins back in the '50's when her dad was signed up by manager Larry Parnes, who gave all his artists stage names to suit their image - hence Billy Fury, Adam Faith, Tommy Steele etc. So a young Marty Smith becam Marty Wilde (so Kim's real name is Kim Smith!). His success as a crooner in the late fifties and sixties was an important influence on Kim as she was growing up.

'Since I was about eleven, I used to do backing vocals on my dad's demo tapes. He was quite successful as a songwriter and his songs were recorded by Status Qua (no, that's not a misprint!) and Lulu amongst others. By the time that I was sixteen, I was going out on the road with him when he used to play around the country in working men's clubs and other grim venues. I was already plannin gto become a singer hen I left school, and I think he was trying to put me off the idea by showing me the seedier, unglamorous side of the business. But it didn't work!' she laughs. 'Actually I really enjoyed it all - it was a great experience.'

After a brief spell in art college, she decided to take the plunge. When she did, she took the whole family in with her. Marty is now her executive producer and chief business organiser, 'Mama', Joyce Wilde, takes care of all the administration and brother Ricki is her co-producer and also co-writes most of her songs. 'It's not that we're like the mafia or anything. We just work well together as a team'.

But being a family-run cottage industry does create its own problems. 'Because they're family, they're always frank with me, sometimes brutally frank! But then I can go out on tour and have my ego massaged', she concedes. Suggestions are always listened to 'but as I'm the one who has to go out and sing the songs, if I really don't like something, I have to be able to say 'Sorry boys, I can't do that'. But I'm not a dictator. It's all about getting results at the end of the day'. Spoken like a true football manager, Kim!

Kim is the first to admit that her career in Britain hasn't always been rosy. 'I've never spent much time touring here so I didn't develop a strong relationship with the audience. But I think that's only part of the reason why my career in Britain has been rocky. People here seem to have a very cynical attitude. They always knock people when they're doing well and often seem to regard success as being almost a crime. Even in TV shows like 'Eastenders' everybody always seems to be saying nasty things about each other and being negative. Why don't they ever say how lovely the weather is or how nice their friends are? I know I'm talking from a privileged position but I don't even like being in the same room as people who are slagging other people off.'

In mainland Europe her success has been phenomenal. She gets mobbed in France where she is described as 'the English Brigitte Bardot' and on tour there last summer, she headlined a concert in front of a crowd of over 75,000.

One of the highpoints of her career came in 1983 when she was presented with a BPI award as best British Female Singer. With quiet satisfaction she says 'That was very special to me at the time because it's an award from the people in the business'. But accolades aren't as important to her as the satisfaction that she now gets from writing her own material. 'I was very frustrated when I was starting out as my heroes have always been songwriters. And working with my brother and my dad who are both established songwriters themselves made me feel that I'd never be able to do it for myself. But when I started listening to what was being played on the radio I thought 'Hey, I could do better than that'! So I gradually started to motivate myself and now I'm happy that my own songs like 'Another Step' and 'Hey Mister Heartache' are good enough to be released as singles.'

It's over seven years now since the release of her first single 'Kids in America' and in that time she's had to learn how to deal with the media's insatiable greed for new blood. 'I remember once when I was doing a TV special and the press turned up but totally ignored me to surround this other girl singer who was the flavour of the month. I knew that she had no talent or anything and wouldn't still be around in a year's time - and she isn't. But I am, and I'm proud of what I'm doing. It hurt at the time but I think it made me more resilient and determined to continue.'

Looking to the future, Kim has no doubts. 'I'd like to be someone like Carole Bayer Sag. She's still busy writing songs for other people but you rarely hear about her. And I'd like to be more involved with production work with other artists.' So is she tired of all the limelight? 'Well put it this way, if somebody told me that I'd never have to do another interview or have another photo taken, I'd think that God had suddenly descended upon me!' 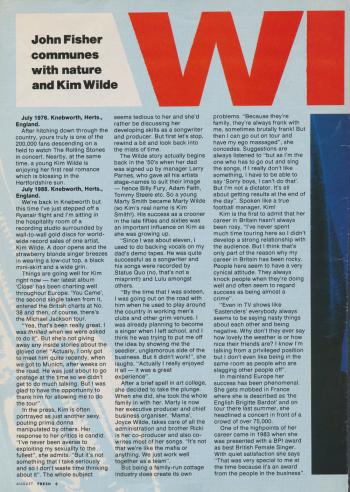 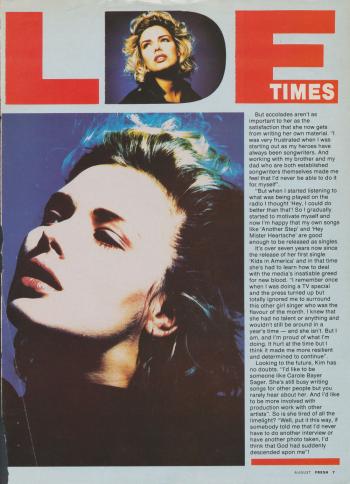