Now that Kim Wilde has her fourth top 10 hit in a row with 'Four letter word', we can definitely put her in the category of superstars. We were very proud when she was prepared to be interviewed when she visited Countdown's tenth anniversary programme. We were the only Dutch magazine to be invited into her Amsterdam hotel room, where she took an hour out to tell us all about her career, her colleagues, her creativity, her life as a teenager and her Calvin...

Did you know you had such a strong album when you recorded 'Close'?
No! I felt they were beautiful songs but doubted their commercial viability. You know, I became a little cynical about success and I have really always been a pessimist where my career was concerned. The previous album contained an American number one hit (the Supremes-cover 'You keep me hangin' on), but the album didn't fare as well. Certainly not in the UK. In the eight years of making albums I have know the highest of heights as well as deep lows and I really had to fight to survive. I have often thought my career was over. The generation singers I was a part of is a long list of pop victims. Chart accidents, and one hit wonders! Where are Hazel O'Connor, Claire Grogan and Toyah Wilcox now? I have survived because I have always progressed creatively, even in less successful days. And last year, the seventh year of my career, everything went so well. I was very surprised when 'Four letter word' was the fourth consecutive top 10 hit.

What can we expect from your next album, and would you want to do a solo tour?
We are writing songs for the next album now. It should be out in October and I will probably do some try-outs in December for a tour! Because I want to show that I can attract audiences even without Michael Jackson. As far as the album is concerned: I don't know if it will be singles oriented. We have changed our style slightly. We want to move forward. What would you expect? I am an adult now, not the teenage superstar I was in the beginning. At least not as much...
Kim Wilde is meant for all ages now. So it will be a surprise whether my next album will contain any hits. I wouldn't mind if it didn't happen.

Can you imagine life without music?
No, that would be like adultery.

But aren't there things you would also like to try, like for instance acting?
I would consider acting to be a challenge. I believe I would like to try and take a step in that direction.

Are you someone who needs to be motivated?
Yes, definitely. I am a little lazy by nature. I definitely need to be stimulated.

You were in the race for a role in Evita, which eventually went to Meryl Streep. Was that a serious thing?
I didn't think so. I read in the papers that they wanted me. I never heard anything since. I am very serious about acting myself. As long as I don't have to play a blonde bimbo, and those are the roles I usually get offered.

You are also an accomplished painter, I hear?
Well, I did make a good portrait of my dad, it's kind of impressionist. I used to go to Art college, and now I paint as a hobby. I really like to go the beach for a weekend. Nothing is more relaxing than sketching outdoors on your own. The paintings I make I also give out to friends as a gift.

Have you finished your house in Hertfordshire yet?
It is progressing. But I don't know if I'm going to live in it. I am interested in renovating old buildings. The house I bought is over 400 years old. It is in fact an old farm. Together with an architect I am renovating it in its original style. We have even been nominated for a prize! That really means more to me than a BPI-nomination, which I didn't even have. It is easier for me to live in London, so I think I may sell the house later, and then I would buy another one to renovate.

Where do you live in London?
It's near Regent's Park, I have a great flat there. But in fact I have no home. I am always travelling. I have enough time yet to live a normal life. I don't think about that for the moment, because I'm a bit of a drifter right now.

During our last interview you said that you would like to get married, especially since your parents have such a perfect marriage?
Yes, but I'm not ready yet. In a few years I will be, I think.

You also said, 'as far as men are concerned, I am very demanding. They will have to be perfect, maybe even too perfect.'
That's right, because when you're 28 you know exactly what you do and what you want from life. That's very different when you are 20! When you meet someone then, your whole life is turned upside down and it's a great kick. The more passionate the men, the better. When I was younger, I was even attracted to the garbage man - as long as someone was wild, rugged and exciting! My desires were more important than my needs. It's the other way around now. Because you know, when someone turns your life around that is not funny anymore when you're 28. Then it's just a pain in the ass. It only distracts.

What does your ideal man look like now, then?
I am attracted to men who are intelligent and cooperative. They must have a sympathy for my lifestyle. They must respect my expectations and have a sense of humour. It has to be someone who has his own life, and does not live through me.

Does Calvin Hayes answer to all these things?
I've known him since 'Kids in America'. I prefer not to talk about the two of us. I mean: what can I say. Yes, he's special. We've got a good thing going, but we have no definite plans.

Your brother Ricky has a baby, you have a younger brother and sister. Doesn't that bring out your own feelings of wanting to be a mum?
No, that has the opposite effect. When Roxanne, my sister, was born, I discovered a sense of responsability that comes with motherhood! You have to be very stable. I can't offer that to a child, at least, not yet. I prefer to wait until I can give them what they need.

Are you prepared to give up your career for a child?
Yes, I would have to. Because my parents were working when I was young, I did feel a bit abandoned at times, although they did everything they could to keep the family close together. That causes me to have high demands on motherhood. I wouldn't want my child to be raised by anyone else but me. I would prefer to have no kids at all, then. When I become pregnant I will stop performing, but I will never stop making music.

You have been on a private all-girl's school. Was that very strict?
Yes, it was. It is much better in public school. It encourages boys to be less aggressive when girls are around. It's much more natural. Luckily I wasn't on catholic school. A few of my friends were, and that has resulted in irrepairable damage, hahaha.... Look at what it did to Madonna....

Do you ever think: 'I wish I wasn't famous'?
Usually I am happy. Just during holidays I have to take care I don't go to some VIP-place. I wouldn't like to hang out with people like Patsy Kensit.

Why do you resent being called the Brigitte Bardot of British rock?
I don't resent it, but it isn't correct. Do you know who looks like Brigitte Bardot? That French singer Vanessa Paradis.

They compare you to Brigitte Bardot because they see you as a sex symbol?
Oh yes. I don't mind that, because I have gold and platinum records on my wall. People don't buy my photographs, they buy my music.

Do you have a real girlfriend? Someone to share your deepest secrets?
Yes, my best friend takes care of catering for many bands. Recently she was away for six months with bands and I saw here in Australia, where I happened to be. She was singing with Supertramp one night. That was very funny. She's also worked with Whitney Houston, so I could ask her how she really was.

Do you prefer Simple Minds or U2?
Simple Minds. I especially liked them in the beginning. And Jim Kerr is a much better entertainer than Bono.

And finally: Rob Lowe or Timothy Dalton?
I think I met Rob Lowe! Backstage after the concert with Michael Jackson in Paris. He was really handsome, so I thought... well... but: no, my boyfriend was there so I didn't want to devote too much attention to Rob Lowe. Pity, huh? 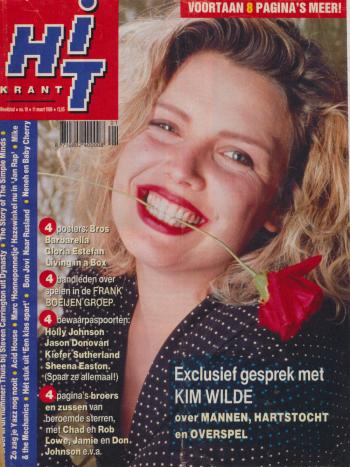 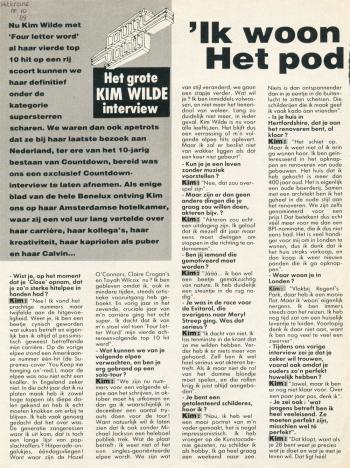 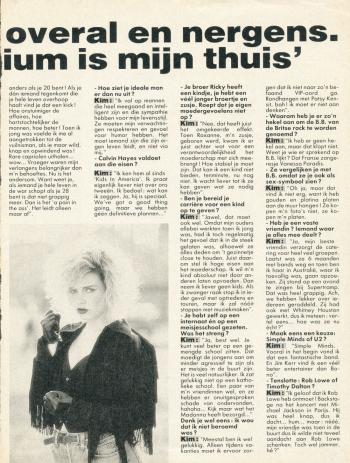 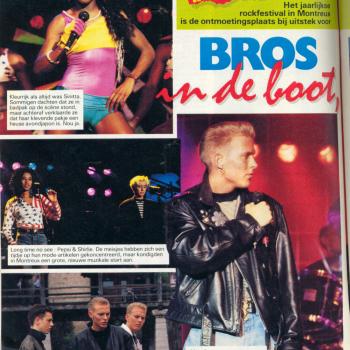