I really have been desperate

Things are going well for Kim Wilde. "You Came", "Never Trust a Stranger" and "Four Letter Word" shot like rockets into the highest regions of the international charts. And her new single, "Love In a Natural Way", is promising again. Kim has many reasons to smile, but, as she told us, there was also a time that she didn't feel so happy...

She sits down next to us on a bench in the empty discotheque of the Joop van der Ende studio's. It's half past one in the afternoon, tonight she will be appearing in the 'Honeymoonquiz'. She is a little tired thanks to her busy schedule, but Kim is in a great mood. "Great! Thanks!", she says when she receives the Popfoto T-shirt we brought for her. "Give me your questions!"

Your career is going better than ever since the past two years.
"Yes, I am glad that my singles are big hits again and that I have a higher profile in the media than ever."

How was the atmosphere in the family when the hits suddenly stopped coming after 1985?
"The pressure to keep coming with hits had taken its toll. My third album, 'Catch As Catch Can', didn't do a lot, and we had troubles with the boss of my record company at the time, Micky Most. My career was in a dip and that caused a great deal of stress. I did have moments when I was really desperate. We had a hard time together. But we stuck together and I'm glad about that. Without the support of my family I could have the same amount of success, but I would be less happy than I am. I don't want to be dependant on my family though, which is why I started writing songs myself. And I feel good about that, because I have a strong place in the family now. But what were we talking about? O yes, I had trouble with Micky."

Why was that?
"He became too involved in my business. He didn't agree with the fact that I went touring, for instance."

But you've got a lot to thank him for, too?
"Oh yes! Originally I would only be singing backing vocals on my brother Ricky's song 'Kids in America'. But Micky Most and his great pair of ears decided that I, and not Ricky should tread into the spotlights. The song became an enormous hit, so thanks to him I was a famous star in one go."

Micky Most didn't only discover you, he's also a friend of your dad.
"No, that's what everyone keeps writing. But my father knew Micky like I know Yazz and George Michael. Just a colleague - that's all."

But Micky Most is the father of your boyfriend.
Kim's eyes begin to gleam. In one breath she tells: "Hahaha, indeed, he's the father of Calvin. (Hayes, from Johnny Hates Jazz.) It's really wonderful: Calvin and I used to play together as a child and we never could have thought that we would fall in love. We saw eachother rather like brother and sister. Calvin used to be in my band. He was very different than what he is now. He was very wild and crazy. I honestly thought he was annoying. I hadn't seen him for years when I met him last year during a TV appearance. I quickly arranged a date with him and soon I found out that I was in love."

What about the rumour that you're getting married?
"It's true that I haven't felt what I do in a long time. But we're not getting married yet. At the moment I don't really feel like doing that."

Don't feel competitive towards eachother?
"No, we're not jealous of eachothers success. The fact that we work in showbusiness makes our relationship stronger. We understand eachother perfectly and we can comfort eachother when something goes wrong."

Didn't your previous boyfriends understand you?
"Well, they had to get used to the fact that I was away most of the time and spent a lot of time in the company of men, because the music biz is still a men's world. I've had a couple of relationships that were rather difficult. But I would never sacrifice my career for a man. If a man can't stand my independence, I don't want him. I'm not a girl that always needs a man."

How do you spend a night off?
"We have loads incommon, so it's always fun to be together. But just like other couples we also have our differences. Calvin likes to go to discos and club, whereas I prefer a quiet night eating out with my friends."

To get back to songwriting for a moment. What's the song 'Stone' on your last album about?
"It's about the environment. With this song I tell people that they should feel responsible. You must not think that you can't do anything about a better environment. Yes, I am doing it myself. I don't use hairspray. My car can't ride on unleaded petrol, so I'll sell it and buy one that can. I'm not perfect. I do eat meat. But I also give money to Greenpeace. can you remember the top conference between Reagan and Gorbachev on Iceland? They were there to abandon short-range missiles, but it was just a publicity stunt from both sides, to win votes. I didn't like it! That's when I wrote 'Stone'."

Doesn't it bother your brother Ricky that he always has to be in your shadow?
"Not at all. When Ricky was eleven he had a couple of successful singles himself. They were hits in Scandinavia. But he was only twelve and couldn't handle the success. My parents and Ricky together decided to quit. He was very glad about that. He likes working in the background. He really values his private life. Sometimes, when all the attention gets to me, I envy him."

Ricky has a baby, don't you want to have one?
"Absolutely not. I think motherhood is the most difficult job around. I couldn't get up at sunrise to feed my baby. I'm not ready for that yet."

But you do like children, don't you? You went home 10 years ago especially to take care of your youngest sister.
"Yes, more or less. I was in art college and was rejected for a few other academies I wanted to go, and I was only attending art college to find other people who wanted to do something in music anyway. Although I had many friends there, that didn't succeed. I went off the academy again, slightly disappointed, and moved in with my parents again. My mother had just given birth to my youngest sister Roxanne. I wanted to help her caring for the baby and focus on a career as backing vocalist. But as you know it went quite differently. And frankly I'm very happy about that, although it wasn't always easy. I must be one of the happiest people in the world." 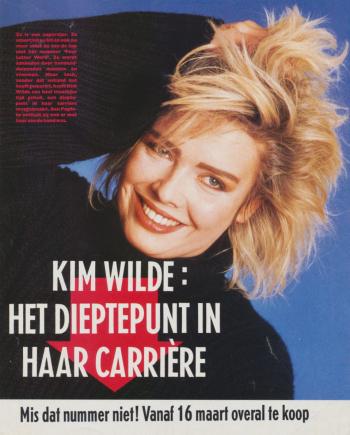 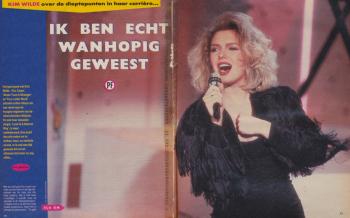 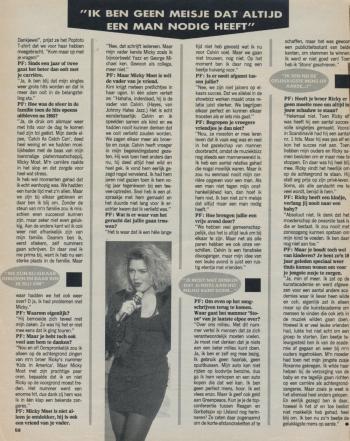